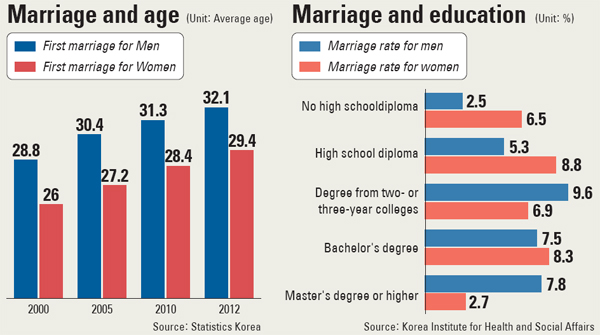 The number of well-educated women with master’s and doctoral degrees continues to increase, an indication of the rising status of women in modern society.

However, having advanced academic qualifications doesn’t appear to bode well for their marital prospects, according to a survey released yesterday by the Korea Institute for Health and Social Affairs.

The survey found that female master’s or doctoral degree holders have a lower chance of getting married than their female counterparts with lower education degrees.

Contrarily, men without college degrees are less likely to be married than their college-educated peers.

Researcher Lee Sang-lim calculated the ratio of recently married men and women compared to those who were single. Groups were divided by age, educational background and career status to examine marriage patterns for those demographics.

The research is based on a sampling of the marital status of male and female subjects between the ages of 24 and 39 from the Korean Labor and Income Panel Study, which was conducted between 2001-8.

He declined to reveal the specific number of those surveyed, saying that he added weighted values so that those polled accurately represented the population. The Korean Labor and Income Panel Study is a longitudinal survey of the labor market used to facilitate research in the sector through the accumulation of statistical data.

The marriage rate of women with a master’s degree or above stood at 2.7 percent, whereas the rate for females who did not graduate from college was the highest at 8.8 percent.

The marriage rate for men with master’s degrees or higher was estimated to be 7.8 percent, while the rate for those with only a high school diploma was 5.3 percent.

The statistical agency cited women’s rising social status and their stronger financial footing as reasons for the difference between men and women.

“Some men are likely to feel intimidated by women who are considered too educated or intelligent,” Lee told the Korea JoongAng Daily.

“By contrast, highly educated women are looking for men who have higher, or at least comparable, education or income status,” the researcher said.

According to data, women with higher education levels tend to marry later.

Last year, the average age of a woman marrying for the first time was 29, a drastic increase from 24 in 1990.

About 20 percent of marriages last year consisted of women over the age of 35, according to Statistics Korea. Ten years ago, women over 35 accounted for only 13 percent of unions.

Lee’s research also suggested women with shorter working hours have a higher chance of tying the knot. However, for men, those with longer working hours were more likely to be married.

In terms of age, women in their late 20s had the highest marriage rate, at 9.6 percent, while the rate significantly reduced to 4.8 percent in the late 30s.

Men in their early 30s had the highest rate of marriage, at 7.7 percent, and for those in their late 30s, that figure stood at 5.5 percent.