With growth of 2.8%, local economy is on a rebound

With growth of 2.8%, local economy is on a rebound 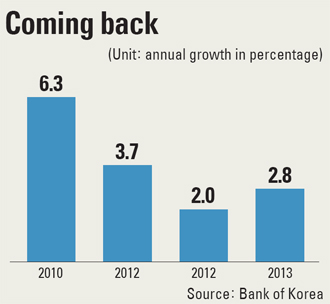 The economy, which has been on a downhill slope since 2010, finally turned around and reported a mild rebound as various indicators ranging from exports and consumption to investment by the private sector improved.

Last year the Korean economy grew 2.8 percent, more than the 2 percent growth reported the year before, according to the Bank of Korea yesterday. The growth hit the central bank’s earlier projection.

Growth fell below 1 percent to 0.9 percent in the last three months compared to the previous quarter, ending a growth streak of more than 1 percent that started in the second quarter.

The central bank said the primary cause of the slight dip in the final months of 2013 was flat growth in government spending.

“Last year, the government’s tax collection was 1 trillion won [$931.1 million] less than in 2012,” said Jung Young-taek, head of the central bank’s economic statistics department. “This affected the fourth quarter and reduced government investment, which resulted in growth falling below 1 percent.”

Until November, 187.9 trillion won had been collected, according to the National Tax Service, 2.5 trillion won less than in the same period in 2012. It was the first time tax collections shrunk from the previous year, since 2009. It is speculated that the cause was a shrinkage in corporate taxes collected. 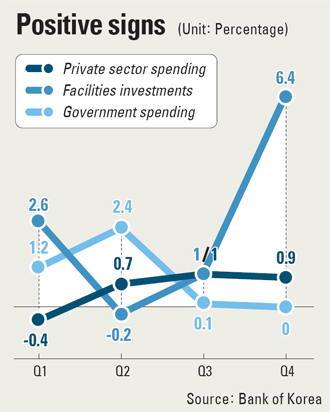 Other than government spending, most indicators showed signs of improvement.

Exports grew 4.3 percent in 2013, a mild improvement from 2012 when exports grew 4.2 percent. It was notable, however, that outbound shipments were able to grow because the local currency strengthened and the Japanese yen weakened, giving a competitive advantage to Japanese companies in the same export industries as Korean companies.

Quarterly growth in the final months showed a particularly strong comeback, turning around from minus 1.3 percent growth in the third quarter to 2 percent expansion in the last three months.

“The prevailing fear throughout 2013 was that the exchange rate would be the death knell for Korean exporters but fourth quarter GDP data provide further reassurance that this has not prove to be the case,” said Mark Walton, senior economist at BNP Paribas.

“The GDP data gives the impression the Korean economy is more resilient to exchange rate strength than is widely appreciated,” he said.

“Exporters will not be entirely immune to the effects of Korean won strength in 2014 but we expect expanding domestic demand in key offshore markets, most notably the U.S. to lift export growth to around 7 percent this year.”

The economist said he was sticking to an earlier projection of 4 percent GDP growth for 2014. This is more than the 3.8 percent projected by the Korean central bank as well as the 3.9 percent estimate of the Korean Finance Ministry.

Although exports still played a crucial role in the nation’s economic growth, an improvement in the domestic sector also helped the economy reach the central bank’s target.

Compared to a year ago, household spending grew nearly 2 percent, up from 1.7 percent in 2012. By quarter, though, it dipped slightly from 1 percent growth in the third quarter, although it showed strong growth of 0.9 percent in the last three months.

With local economic indicators showing positive improvement, along with a global economic recovery, the central bank is confident of 3.8 percent growth for this year. The International Monetary Fund earlier this week raised its outlook for this year’s global economic growth from 3.6 percent to 3.7 percent.

However, there are still several factors that may curb the positive momentum. One is the ever-growing household debt problem in Korea, which is already believed to have exceeded a historic level of 1,000 trillion won. Although there are still debates over whether the central bank will raise or lower interest rates, once it decides to normalize its loose monetary policy rate, it could increase the burden of households in debt, and that might lead to a sudden halt in household spending.

Among external factors that could cool the current momentum, the Korea Institute for International Economic Policy yesterday cited the tapering of the U.S. stimulus program as well as the continuing tensions in the region.