Cranston heads to Broadway as LBJ

Cranston heads to Broadway as LBJ 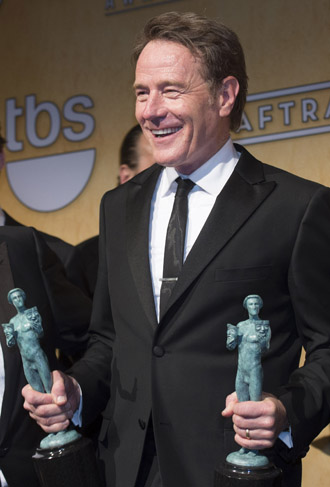 NEW YORK - After five acclaimed seasons and multiple Emmys for playing a meth-making chemistry teacher on television’s “Breaking Bad,” actor Bryan Cranston is stepping into the shoes of President Lyndon B. Johnson for his Broadway debut in “All the Way.”

The play, which begins previews on Feb. 10 and opens at The Neil Simon Theater on March 6, chronicles the first year of Johnson’s presidency after he was catapulted into the White House following the assassination of John F. Kennedy in 1963.

It is not the first opportunity that Cranston, 57, has had to star on Broadway, but he said other plays were not quite right.

“I wanted to wait for something that had meaning, that really had resonance, that was historically important, socially important and entertaining,” he said in an interview. “And ‘All the Way’ is all of that.”

Cranston researched the 36th U.S. president, who was often referred to as LBJ, and talked to people who knew him. But he also said he tried to keep an open mind and not have any judgments about the character.

“You never know what you are about to gleam from your experiences,” he said.

On his second visit to the LBJ Presidential Library in Texas, Cranston saw a letter from Jackie Kennedy thanking Johnson for taking the time to write to her children after their father’s death.

“And I’m thinking within four days of taking office from a tragic experience, he becomes the president of the United States with all that implies and he took time to write letters to two little children of John Kennedy, the former president. That says something about a person,” he said.

Cranston heads an ensemble cast of 20 actors who take on multiple parts in the play directed by Bill Rauch and written by Robert Schenkkan, the 1992 Pulitzer Prize winner for “The Kentucky Cycle.”

Schenkkan grew up in Austin, Texas, and had always been interested in LBJ.

“He was truly Shakespearean - not only physically enormous but enormous in his ambitions, his appetites, his virtues, his vices, his flaws,” he said.

Schenkkan constantly refined a large amount of material to get to the heart of Johnson and the “bare-knuckle struggle” that culminated in the 1964 Civil Rights Bill and his battle for re-election.

“The core of it always is this one individual, this one vexing, confusing, deeply complicated and conflicted individual who is making his way through history and changing the United States and the world as a consequence,” he explained.

Schenkkan said Cranston, who portrayed the cancer-stricken chemistry teacher in “Breaking Bad” who uses his knowledge to make and sell methamphetamine to care for his family, was the perfect choice to portray Johnson in the play that premiered at the Oregon Shakespeare Festival in 2012.

“There are two things you want in an actor playing LBJ. You want someone who is so charismatic and so charming, and you want somebody who is absolutely terrifying. And in Brian Cranston we have both,” Schenkkan said.

“The role is the size of Lear,” he said, referring to Shakespeare’s “King Lear” character. “He is on stage virtually the entire time.”

“I think they had a tremendous amount of respect for each other. They both knew they were effective leaders,” Dirden said about King and Johnson.

Cranston said he never knows what detail or clue will resonate with him when he is researching a character, but when it does, it hits profoundly. “I want to be all of him, his highs, his lows, his good, his bad, and to present it honestly,” he said about Johnson. Reuters