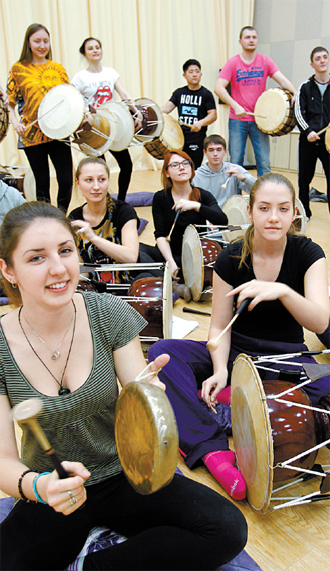 A group of Russian students majoring in Korean studies at Far Eastern University learn how to play Samul nori, a genre of percussion music that originated in Korea, at Jindo National Gukak Center in South Jeolla. By Jang Jeong-pil

JINDO, South Jeolla - On a recent day at a state-run traditional music center in Jindo County, South Jeolla, the sound of beating drums sent vibrations through the halls. In one of the rooms, an ensemble of Russian students was playing Samul nori, traditional percussion-based music that originated in Korea.

The group, from Far Eastern University in Vladivostok, mostly consisted of students majoring in Korean studies there. This is the third time they have visited the Jindo National Gukak Center. The students are involved in a school club dedicated to exploring and learning Samul nori, and many of them have visited the peninsula before.

Kim Bong-geun, 39, their teacher and a member of the institute, praised the amateur musicians’ performance.

“I think that they are fairly good at playing the traditional instruments. Now I’m teaching a traditional tune that originated in the North and South Gyeongsang regions,” he said.

Indeed, the journey to Korea from Vladivostok, in the far eastern reaches of Russia, wasn’t easy. The students had to spend 22 hours on a ferry, in addition to nine hours on a bus, just to get to town. The group arrived on Jan. 16 and is scheduled to spend 12 days in Korea.

Another instructor admired the students’ diligence, noting that the Russians expended an enormous amount of time and effort to master what they had learned.

“They would play music until midnight, based on teachings recorded on their cell phones,” said Heo San, a 54-year-old lecturer. “And they spent most of their time practicing, except during lunch and dinner time.”

Saprunova Ekaterina, a 22-year-old senior, developed a unique attachment to Korea, often taking trips with her father, who works at a vessel repair company in Busan. She began visiting at the age of 9, and the connection she felt to the country inspired her to major in Korean studies.

“I think the sound of Samul nori intrigues people because it’s strong yet simple,” she said. “This is the third time that I have visited this center. Whenever I come here, I feel my performance skills get better and better.”

Established in 1995, the music club has been invited to various Korea-related events and festivals, where the members perform.

“What I really like about Korea is that the winter season is mild compared to that of Russia,” said Kan Ruslan, 26-year-old graduate student who is ethnically Korean. Kan is a descendant of Korean migrants to Russia.

Akulenko Vadim, a faculty member in the Korean studies department, said that the descendents of ethnic Koreans account for about 15 percent of the 200 students in the program.

In addition to their trip this month, the members of the music club have been invited to the 2014 Olympic Games, where they will present a set that will include traditional Korean music.