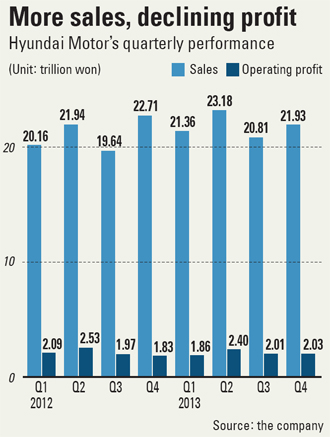 Hyundai Motor’s profitability declined in 2013 despite an increase in overseas sales.

“With good sales in overseas market like China and the United States and more companies included in our consolidated basis accounting, our sales have increased, but the operating profit declined due to a slump in domestic market sales and production disruptions at local plants,” Hyundai said in a release.

This year, Hyundai’s goal is to sell 4.9 million vehicles worldwide, up 3.5 percent from last year. The automaker said it will focus on internal stability based on quality growth and future competiveness.

He said that since Japanese automakers, excluding Toyota, also rely on overseas production, the direct impact of the weak yen could be limited but could boost their profitability.

“Although they might not pursue price discounts or increase incentives, we are concerned they can look to increase sales by putting more money in marketing,” Lee said. “There is also concern Japanese companies can invest more money on R&D, so that’s why we are also planning to reinforce our R&D investment, too.”

Lee added that the company sees the average won-dollar exchange rate this year to be 1,060, but for its 2014 business plan it has figured 1,050 won per dollar and plant operation at 100 percent, compared to 105 percent in 2013.