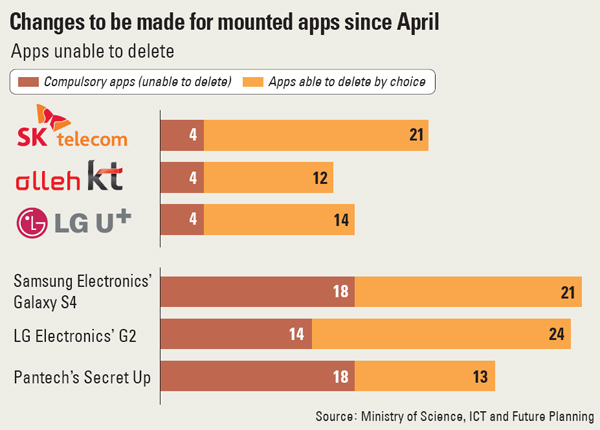 Smartphone users will be able to delete applications preloaded on smart phones by mobile carriers or the smartphone makers, the Science Ministry said yesterday.

The delete function for preloaded apps on smartphones, which will allow consumers more choice to delete unwanted apps and replace them with the ones they want, will be applied to smartphones released from April.

The Ministry of Science, ICT and Future Planning announced guidelines for preloading apps on smartphones, ensuring users’ right to choose and the ability to delete them.

The guideline classified the apps that are necessary to operate the smartphones or implement technology and unique features of smartphone hardware as essential apps or selected apps so that users can delete them freely.

The move is also expected to improve battery usage and memory capacity, the ministry said.

To inform consumers of the changes, the ministry decided to post notices on each mobile carrier and smartphone maker’s website.

Samsung Electronics’ Galaxy S4 released by SK Telecom has a total of 80 apps installed on each new phone, including 25 apps loaded by the mobile carrier, 39 by the smartphone maker and 16 by the OS provider, which is Google. When the new guidelines go into effect, at least 40 of those apps can be deleted.

Among the apps loaded by the mobile carrier, only four are considered essential apps, including one that connects to a customer service center, the app store, short-range wireless communications or near-field communications (NFC) and Wi-Fi access.

Among the apps installed by the smartphone manufacturer, the ministry designated 14 to 18 apps as essential, including the call, messaging, camera and digital multimedia broadcasting (DMB) functions, while 13 to 24 apps are eligible for elimination.

Google is currently installing 13 to 16 apps that cannot be deleted on smartphones operating on Android OS. However, it plans to classify the apps into essential and selective categories when signing a contract with smartphone makers from now on, allowing selective apps to be deleted based on the ministry’s guidelines.

Other businesses also decided to implement policies reducing the number of unpopular apps preloaded on smartphones, mostly those that have low utilization rates.

Samsung Electronics is set to reduce the number of apps installed from 39 to 26, LG Electronics from 38 to 28 and Pantech from 31 to 26.

The guidelines also recommend that the smartphone makers and mobile carriers put the preloaded apps into folders by function so that they do not take up space on the home screens of phones.

“The guideline was created to rectify unreasonable practices that cause inconveniences for smartphone users and hinder fair competition,” said Lee Jin-kyu, director general for Internet policy at the ministry.

“By establishing a consultative council for smartphone user policies in the future, we will check the implementation status and improve the effectiveness of the system,” he said.