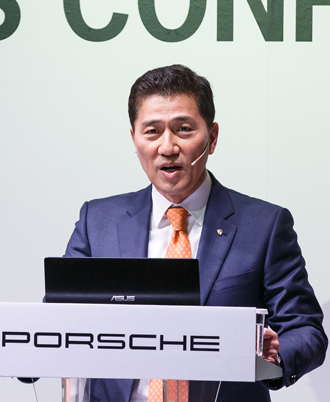 Porsche Korea CEO Kim Geun-tak says the company will release 12 new models this year with a goal of selling 2,600 vehicles.

Kim made the remarks yesterday while discussing the business strategy of the German sports car manufacturer’s Korean unit in its first year of existence. Previously, Porsche models were imported and distributed by Stuttgart Sports Cars since 2005, but the German automotive group decided to set up its own business unit this year.

“Porsche decided to establish the Korean unit because of its high evaluation of the potential of the market,” Kim said at a press conference at Hotel Shilla, central Seoul. “Our goal for this year is to reinforce Porsche’s image as the most desirable sports car brand, expand the market and boost customer service.”

Korea is the fourth country in Asia after China, Japan and Singapore and the 17th worldwide to have a Porsche branch. Helmut Broeker, vice president of overseas and emerging markets for Porsche, said the Korean unit will play an important role in the company’s medium-term business plan to increase sales in Asia by 2018.

According to data from the Korea Automobile Importers and Distributors Association, 2,041 Porsches were sold in Korea last year, up 34.6 percent from 2012. However, Kim said Porsche Korea will have a target sales growth of 10 percent a year.

As part of the plan, the company will introduce 12 new models, including the Macan, the 911 GT3 and the 918 Spyder. The Macan is a highly anticipated compact sport utility vehicle scheduled for release in May.

Kim, who previously worked for GM Korea, Chrysler Korea and Ssangyong Motor, said the company is also reinforcing its after-sale service. Porsche currently has seven showrooms in the country and plans to open two more in Daejeon and Gwangju, while adding an additional two service centers.

After the expansion, daily repair capacity will nearly double to 96 vehicles, according to the company.

“We will also double the volume of auto parts stored in Korea in order to reduce the time for after-sale service and reinforce technician education to boost quality,” Kim said.

Porsche Korea will offer additional and improved events this year to enhance customer loyalty and promote brand value, he said. The company said it will hold driving events like the Porsche World Roadshow and the Carrera Challenge Korea, as well as the Porsche Golf Cup. 