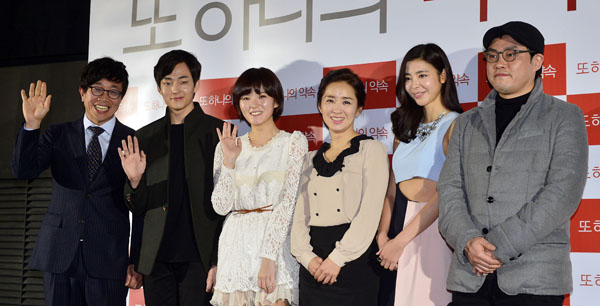 Park Chul-min, who plays the heroic father, said that the story was foremost about love and family.

When director Kim Tae-yoon said he wanted to shoot a movie based on the case of Hwang Yu-mi, a 23-year-old woman who died of leukemia four years after getting a job at a semi-conductor production plant, everyone was against it.

After all, the entire plot revolves around a family’s legal battle against the nation’s biggest conglomerate, Samsung Electronics.

At a press conference on Monday, Kim Tae-yoon and the cast said that despite the obvious David-versus-Goliath theme, the film never intended to satirize or demonize Samsung.

“After each screening, the first question on everyone’s lips is whether I was threatened in any way during production,” said Kim. “I really pondered why people would ask me that.”

The director added that he thought there was something strange about a society where people were fearful to tackle a controversial topic.

And although he confessed he was “a little nervous, too, initially,” the filmmaker said he received no threats of any kind to deter him.

In the film, the fictionalized conglomerate is called Jinsung, and it is portrayed as a money-hungry powerhouse that churns out some of the most heartless, cunning and dogged villains in Korean cinema.

At every stage of the harrowing legal battle, Jinsung workers spy on the family of the dead woman, stalk them and threaten them, all for the sake of their company, which they genuinely believe to be in the right.

As someone who has worked on mainstream films like “Perfect Number” (2012) and “Insadong Scandal” (2009), Kim said the biggest obstacle to filming was the lack of money because no investor would get on board the controversial project. 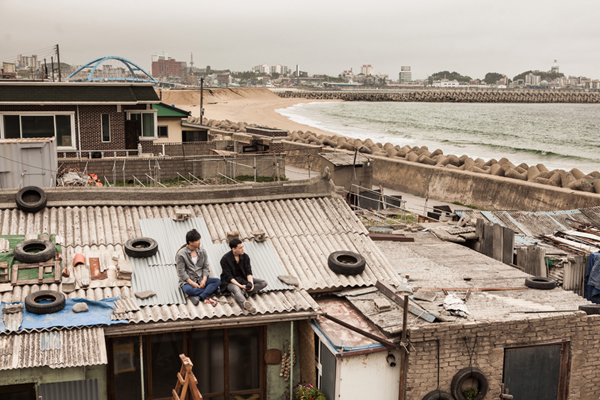 Director Kim Tae-yoon, far right, with the cast of “Another Family,” which opens Feb. 6. Provided by OAL

“We had to rely on crowd funding for the entire production,” said Kim. In the end, through 7,722 private donations and small firms that got behind the project, the film raised 1.5 billion won ($1.3 million).

And while Kim wondered many times along the way if there would be enough money to see the project through to the end, he said he was inspired by the tireless dedication of Hwang Sang-ki, the father of the deceased.

“I wondered whether if he could smile as he does today if he gave up halfway through,” said Kim.

The process also involved Kim digging deep into his heart.

“I pondered over the question of why was I making films,” he said. But the answer was simple. “I wanted to ask viewers, ‘How are you getting on in life?’ ”

To ask that question in a subtle way, Kim looked at a medley of in-between characters - people who are not just “good” or “bad,” but in various stages - and asked, “How far are you willing to go to show your loyalty?”

As they bounce between being friend and foe, each character has their reasons for either betraying others or staying loyal.

“You know in life people get so focused on moving forward that they forget to look around and see who they may be hurting,” explained Yoon Yoo-sun, who plays the victim’s mother. “No one starts life thinking ‘I’m going to cause people harm,’ but because we focus so much on where we are going, we do.”

Yoon said she hoped that audiences will take a good look at themselves after watching the movie.

Kim Gyu-ri, who plays the attorney that helps the family, said the movie represented “the love of a father” as well as the beauty of a fulfilled promise.

“When I first read the manuscript, I remember being moved by the father’s love for his daughter,” the actress said. “No matter how big or small, I think it’s a beautiful thing when a promise is fulfilled.”

“Our topic is no doubt controversial, but love and family take a big part of the film,” said Park Chul-min who plays the cabbie based on Yu-mi’s father.

While the media for the most part ignored the story, the Hwang case rose to prominence in 2011 when the Seoul High Court ruled in favor of Hwang Sang-ki, overturning the former verdict by the Korean Workers’ Compensation and Welfare Service that said there was no evidence to suggest that Hwang Yu-mi died from a work-related illness.

Since Hwang’s victory, other victims and their families have begun filing similar suits.