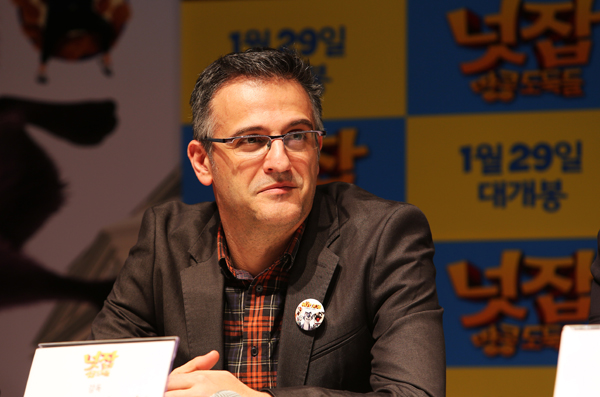 Director of “The Nut Job,” Peter Lepeniotis, said the original concept for the film came from a Korean company. Provided by Sidus Pictures

Continuing the Korean movie industry’s successful inroads into the global market, a new Korean-North American animated movie will be released in Korea on Wednesday. The film already opened in 3,427 theaters in North America on Jan. 17, taking in $20 million in its opening weekend.

“The Nut Job,” a co-production by the Korean company RedRover and Toronto-based animation studio ToonBox Entertainment, is the story of a mischievous squirrel named Surly and his friends who team up for a major heist on a nut shop - and along the way, there are lessons about friendship and life.

The original version features the voices of Liam Neeson and Katherine Heigl, while the Korean version includes Um Sang-hyun - best known for playing Po in “Kung Fu Panda” - and Park Ji-yoon of Rapunzel in “Tangled.”

At the press screening on Jan. 17, the production team, including director Peter Lepeniotis, talked about the movie and its strong Korean side.

“[‘The Nut Job’] without a doubt is a Korean-made animation,” said Lepeniotis. “The original concept of the film came from RedRover when they approached me with the basic concepts for the film, which got me really excited.”

When asked about what it was like to work with Korean animators, the director’s first answer was that the team was “extremely smart.”

He added that the “appreciation Koreans have for animation” helped the process of making the movie. “Every directorial command returned better than I expected,” he said.

In a bid to attract more global attention, the film added an animated version of the singer Psy, dancing his way through “Gangnam Style” with the other characters of the film as the end credits roll.

Given the worldwide success Psy has had with “Gangnam Style” and “Gentleman,” the production team’s use of an animated Psy could be effective in promoting the film internationally.

The Korean technology team had to go through some difficult challenges in the process of designing the characters and bringing them to life.

“There are some unique facial expressions and gestures that only Western people are able to do,” said animator Jung Woo-suk.

“It was a bit challenging to capture those and put them into the characters.”

In addition, the film includes a homage that most non-Korean viewers are going to miss out on, a reference to the classic Korean movie “Welcome to Dongmakgol” (2005) - it’s a rich 3-D scene where a massive amount of popcorn bursts into the air after a tree storing the animals’ food for the winter explodes.

As the press conference neared its end, Ha Hoe-jin, CEO of Redrover, emphasized that “The Nut Job” is a milestone for Korean animation, at last entering the Hollywood market.

“Compared to the 2,100 screens in all of Korea, the meaning of opening on 3,400 screens in the States is a pretty big thing,” said Ha. “I think viewers can feel proud while seeing the movie.”

“The Nut Job” is slated to open in about 120 countries.