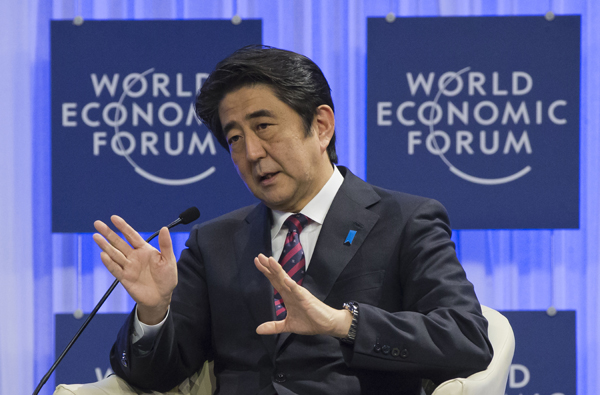 Japanese Prime Minister Shinzo Abe was put on the cutting board on Wednesday regarding his visit to the controversial Yasukuni Shrine last month, drawing criticism from world leaders, experts and intellectuals at an international economic forum in Davos, Switzerland.

In his keynote speech during a panel attended by approximately 2,000 people at the 44th World Economic Forum (WEF), Abe was focused on promoting his “Abenomics” policy, as well as security and peace in the Asia-Pacific region.

Klaus Schwab, executive chairman of the WEF, pointed out that Abe’s visit to the Yasukuni Shrine seemed to have strained Japan’s relations with countries in the region, particularly Korea and China.

However, Abe said he had “no intention whatsoever to hurt the feelings of people in China and Korea.”

He was left to defend his position on whether he believes the souls of World War II criminals are enshrined at Yasukuni, and noted that the shrine honors other Japanese war dead as well, not just those who perished during World War II.

Abe added that it was the right of any world leader to put two hands together in prayer for “those who fought for the country.”

Amid friction in Northeast Asia over historical and territorial disputes, Abe also made a controversial statement in his Davos speech comparing current tensions between Japan and China to the rivalry between Britain and Germany on the eve of World War I. Other panelists and academics at the forum also voiced concern about the situation in Northeast Asia, which was further exacerbated by Abe’s Yasukuni visit.

In particular, Wu Xinbo, a professor of international studies at Fudan University in China, stated that trust between China and Japan was low following the visit. He speculated that political relations would likely remain frosty for the remainder of Abe’s term.

“In one word, there is no misunderstanding,” Cho said yesterday at a briefing. “There is one clear truth. The problem is whether that is known or realized.

“Japanese political leaders including the prime ministers should not visit the Yasukuni Shrine,” he reiterated. “We have made it clear that the act of visiting the Yasukuni Shrine is ultimately the same as not reflecting upon the mistakes during the Japanese imperial era.”

Stating that it does not make sense to speak of friendship between Korea and Japan while Japanese leaders visit the shrine, he added: “This is not just our voice, but other North East Asian countries. International media, intellectuals and those with common sense all show one voice.”

Chinese Foreign Ministry spokesman Qin Gang yesterday responded to Abe’s comments in Davos by calling the Class-A war criminals honored at Yasukuni as “Nazis of the East” and warned such willful actions of Japan’s leaders will be harmful to Asia and itself.

In an interview published yesterday in the Asahi Shimbun, U.S. Ambassador to Japan Caroline Kennedy also expressed disappointment over Abe’s visit to the Yasukuni Shrine, a sentiment that echoed those of Washington through the U.S. Embassy in Tokyo immediately following the incident.