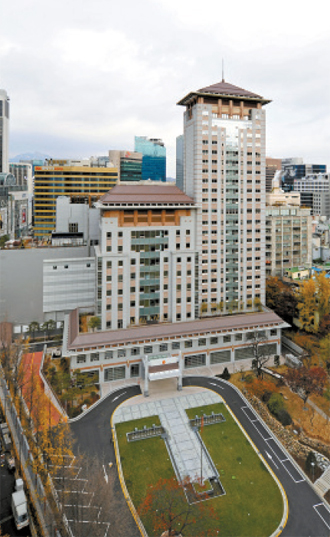 The Chinese Embassy relocated to its original site in Myeong-dong, central Seoul, in late November from a temporary location in Hyoja-dong, Jongno District. It consists of two buildings - one 10 stories and the other 24 - and its area is the largest of all embassies in Korea. [JoongAng Ilbo]

China flung open the doors of its new embassy to locals and store owners in the surrounding neighborhood of Myeong-dong, the bustling shopping district in central Seoul yesterday.

The embassy relocated to its original site in late November, and the open house was held to celebrate the Lunar New Year holiday, which falls next Friday.

It was an unusual occasion considering that foreign embassies in Korea generally restrict their open house guest lists to other diplomats and local VIPs. For ordinary people to get the opportunity to wander around the Chinese Embassy was unprecedented. China opened its embassy in Korea in 1992, the year the two countries forged diplomatic ties.

Also notable was the fact that the embassy opted to hand deliver invitations to each and every one of the stores in the vicinity instead of sending them through the mail, the district office or an organization of Myeong-dong shop owners.

“We have caused inconvenience to the store operators nearby over the course of building such huge buildings,” explained an embassy official. “We have invited them to offer our apology and to become friendlier neighbors.”

The Chinese Embassy temporarily moved to Hyoja-dong near the Blue House in 2002 after it decided to build two new embassy buildings on the original site in Myeong-dong. The project was suspended several times due to budget constraints and opposition from some Koreans. Construction finally began in 2010.

One building has 10 floors and is fully devoted to embassy operations. The second has 24 floors and is dedicated to residences. The two buildings boast a combined 17,199 square meters (20,569 square feet) of floor area, making China’s the biggest of all embassy buildings in Korea. It is also the second-largest Chinese embassy in the world behind the one in Washington, D.C.

Analysts say China’s open house coincides with the more down-to-earth and friendly diplomatic style of Chinese President Xi Jinping. Xi has cultivated a reputation for communicating with ordinary people ever since he served as a local government official when he was in his 30s.

Xi visited a dumpling restaurant in Beijing last December without prior notice, queuing with other customers and paying for his meal on his own. That made huge headlines.

Earlier this month, Xi showed his office for the first time while delivering a New Year’s message. Chinese leaders’ offices have remained behind a veil of secrecy, while U.S. President Barack Obama and his predecessors have openly showed their offices.

Another interpretation of the Chinese Embassy’s novel hospitality is that it indicates the tight relationship of President Park and President Xi. The two had a summit meeting for the first time last June when Park visited Beijing and met twice later at a Group of 20 summit in Russia in September and an Asia-Pacific Economic Forum (APEC) meeting in Bali in October.

China went so far as to open a memorial hall in Harbin on Sunday for Korean independence fighter Ahn Jung-geun after President Park asked for a memorial.