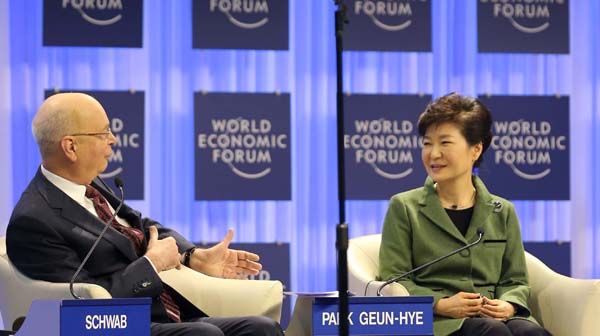 President Park Geun-hye talks in a general meeting at the World Economic Forum in Davos, Switzerland, on Wednesday with Klaus Schwab, founder and executive chairman of the annual event. [NEWSIS]

As she enters her second year in office, the results of President Park Geun-hye’s diplomatic efforts are slowly beginning to take shape.

Korea’s first female head of state put a tremendous amount of energy into numerous state visits during the first year of her term, wrapping up on Wednesday an eight-day overseas trip in which she traveled to India and Switzerland.

Following a meeting in New Delhi, Park and Indian Prime Minister Manmohan Singh agreed to resume the construction of a steel plant in the state of Odisha, which had been pending for nearly a decade. The project is overseen by Posco, Korea’s top steelmaker.

In Switzerland, which followed her trip to New Delhi, she and Swiss President Didier Burkhalter agreed to jointly foster talented human resources in forward-oriented technologies, backed by the European nation’s vocational education system. As part of that pact, Korea will select 20 graduates from specialized vocational high schools who studied machinery or biotechnology and send them to Switzerland for a two-year vocational training course.

President Park has also managed to maximize Korea’s national interests, according to experts, maintaining a diplomatic balance with the United States and China after quietly expanding the country’s 62-year-old air defense identification zone (ADIZ) in December. Korea’s ADIZ also overlaps with remote islands declared by China and Japan under similar zones, but despite the potential that it could strain relations with the United States, China and Japan, the expansion went ahead without much fanfare.

While China’s unilateral announcement of its expanded air defense identification zone “raised the temperature in Northeast Asia somewhat, we were able to deal with this prudently by taking advantage of the trust we have built up with the Chinese,” Park was quoted as saying in an interview with Bloomberg on Jan. 13.

In addition, U.S. President Barack Obama’s signing last Friday of a spending bill that includes a highly symbolic provision on Japan’s sexual enslavement of Koreans and other Asian women during World War II was inspired by President Park, according to a source at the Blue House. “When U.S. Vice President Joe Biden met with Park during the Seoul visit earlier last month, President Park consistently raised the ‘comfort women’ issue, leading the U.S. political community to realize how serious Japan’s distortion of history was,” the source said.

Kim Hyun-wook, a professor at the Korea National Diplomatic Academy, agreed that efforts by the president are only now starting to materialize.

“The diplomatic achievements of Park over the past year have been surfacing lately,” the educator said. “While solidifying the Korea-U.S. alliance, the president has further developed Korea-China ties. Korea may need to maintain a hard-line stance, but less cooperation with Japan could weaken the strategic implication of Korea for China.”