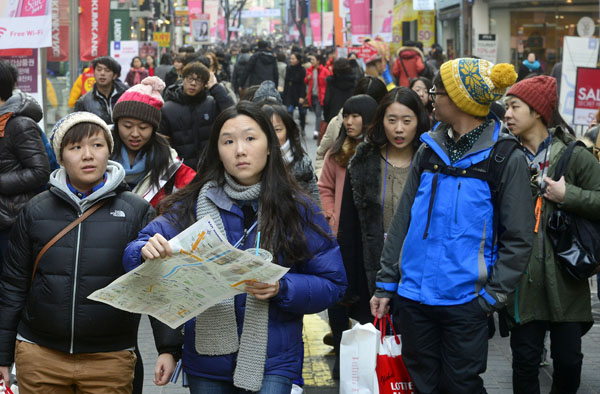 Tourists walk around the Myeong-dong area yesterday in central Seoul. The Seoul Institute announced yesterday that the number of foreign tourists who visited Seoul in 2013 was expected to exceed the 10 million mark for the first time, a record high. [NEWSIS]

Seoul will see a record number of tourists visit the capital city in 2013, with more than 10 million travelers coming here for the first time, according to estimates released yesterday by the Seoul Institute.

The estimate comes from a study by Seoul’s government-run research institute that explores the latest tourism trends in Korea, with its emphasis on Seoul.

To get the projected figure, researchers took the number of travelers who visited the country last year and divided it by the percentage of tourists who visited Seoul in 2012. Based on that calculation, the number of visitors to Seoul for 2013 was estimated to be about 10.05 million, the institute noted.

Last year’s total number of foreign tourists in Korea was 12 million, and the 2012 figure - the latest available - stood at 82.5 percent, according to the Ministry of Culture, Sports and Tourism.

In 2012, the number of visitors to Seoul was recorded at 9.2 million, also a record high for that year.

Since the last half of the previous decade, Seoul has recorded an average 10 percent increase in the number of visitors from outside the city.

But despite the encouraging results, research indicated that Korea needs to work on increasing the number of people who revisit the country.

The revisit rate has consistently declined, standing at 41.8 percent in 2012 and 41.9 percent in 2010. In 2005, 44.7 percent of tourists made return visits, according to the study, which cited the ministry’s research.

The average daily expenditures for tourists in Seoul - including the cost of accommodation and meals - totaled about 1.41 million won ($1,315). Taiwanese tourists spent the most money, followed by the Chinese. Japanese travelers ranked third.

Researchers also noted that conventional tourist sites, such as the royal palaces in northern and central Seoul, are losing popularity to more modern hangouts in Gangnam District and the Hongik University neighborhood.

Tourists felt most disappointed with the Dongdaemun shopping area in northeastern Seoul, followed by Namdaemun and Myeong-dong, in central Seoul.