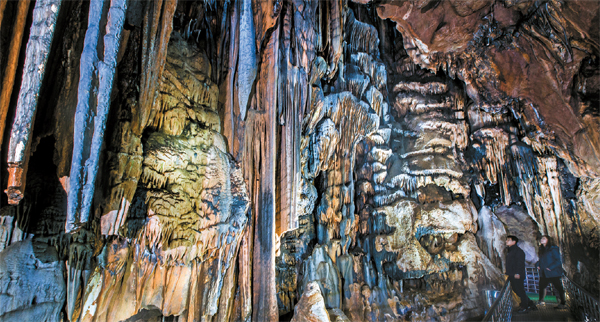 Seongnyu Cave in Uljin, North Gyeongsang, was the first cave in Korea that opened to the public for sightseeing. By Shin Dong-yeun

With so many exotic places to travel to these days, caves are hardly at the top of the list of most people’s favorite destinations.

However, Koreans over the age of 50 can remember the days when Seongnyu Cave in Uljin, North Gyeongsang, and Gossi Cave in Yeongwol, Gangwon, were the go-to places for school trips, while Manjang Cave in Jeju was a must-visit place for honeymooners.

A JoongAng Ilbo article on July 18, 1974, said that there were 11 motels and 30 cheap inns near Gossi Cave, but due to its popularity during the vacation season, people would stay in people’s homes around the region, some even sleeping on living room floors. The popularity of caves as a travel destination among Koreans continued well into the 1980s. In 1989 alone, some 804,000 people visited Seongnyu Cave.

Although those days are gone, some people still visit the caves - particularly during winter days. Throughout the year the temperatures inside the caves range from 10 to 15 degrees Celsius, or 50 to 59 degrees Fahrenheit. They are, quite literally, cool places to visit during the summer, too.

But visiting caves during the winter may be a better idea because the deeper you get in some caves, the higher the temperature is, with the mercury level sometimes rising to 20 degrees Celsius.

In South Korea alone there are more than 1,000 caves, 27 of which are designated as Natural Monuments, a type of state-designated heritage. But only nine of those are open to the public. Seongnyu Cave was the first to open, in 1967, and Gossi Cave followed in 1974. The latest to open to the public was Baeknyong Cave in Pyeongchang, Gangwon, in 2010.

Koreans can consider themselves lucky to be able to explore caves any time because they are uncommon in less mountainous countries. But the Korean Peninsula is rich in limestone, a material easily dissolved by water that is made acidic by carbon dioxide. Limestone caves are formed when rain and underground water seeps into the rock.

In the face of the recent cold snap, the JoongAng Ilbo decided to explore some of Korea’s caves, visiting Seongnyu Cave in Uljin, North Gyeongsang, and the Daei Cave Complex in Samcheok, Gangwon. 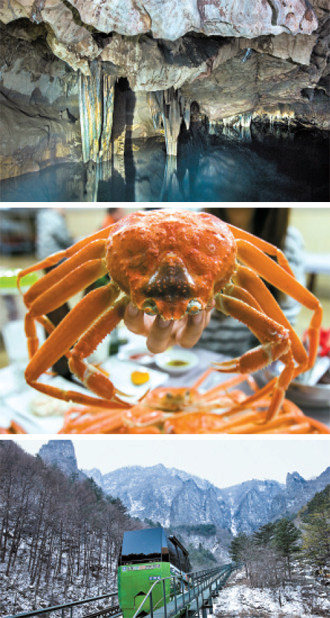 (Top) Seongnyu Cave is famous for its submerged stalagmites. (Middle) Enjoying the Uljin delicacy of snow crab is an added charm of visiting Seongnyu Cave. (Above) A monorail takes people to the entrance of the caves in Samcheok, Gangwon.

Once you arrive in Uljin, head to Wangpicheon. On your way, you will see a cliff with a large hole in its middle. That would be Seongnyu Cave, considered one of the most magnificent caves in Korea.

Even ancient Koreans were curious about this big hole. They explored the cave and left their thoughts in writing. One of the most famous records is by the scholar Yi Gok (1298-1351). In his volume, “Gwandongyugi,” he wrote about traveling the country and visiting Seongnyu Cave. The record is considered Korea’s oldest chronicle of cave exploration.

It was in 1963 that Seongnyu Cave was designated as a Natural Monument. It opened to the public four years later. Back then, most Koreans would go on a sightseeing trip just once or twice in their entire lives, so word traveled fast that a mysterious cave was now open for sightseeing. The nickname people gave the cave was the “underground Mount Kumgang,” referring to the famous mountain that has long been considered a place so beautiful that everyone should visit at least once in their lives.

Once we passed through the entrance, we encountered the Earth from 250 million years ago. Glasses fogged up and necks felt a rush of warm air. It was such an odd feeling to see water dripping inside the cave when all is frozen outside. The drips have formed so many stalactites hanging from the roof of the cage and stalagmites rising from the floor. They are common sites in caves, but something about them still looks mystical.

The cave, which includes five ponds and 12 chambers, is like a labyrinth, but all is lit up with LED lights. The cave is famous for its stalagmites that are submerged in the ponds. Some of the water is as deep as 30 meters, or 98 feet - geological proof that before the Ice Age the surface of the sea was lower than it is today.

“After a lot of rain, cavern water becomes clean,” said Kim Myeong-jung, the head of the Seongnyu Cave Management Office, describing the cave’s charms to visitors. “When you gaze into the water, you will be able to observe the stalagmites better, and sometimes even spot some fish.”

Kim also said that, despite the many visitors who have been coming to the cave for nearly half a century, bats still live in the cave. “Some people see bats and regret that they came,” he says. “But they are actually lucky [to have seen them].”

Of the 200,000 visitors to Seongnyu Cave every year, 40,000 of them come between November and February. After exploring the cave, enjoying the Uljin delicacy of snow crabs is something that a lot of visitors like to do. 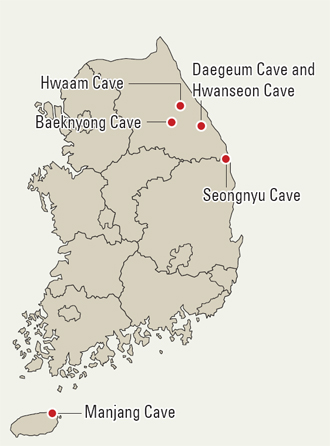 The area near Mount Deokhang in Samcheok, Gangwon, boasts the highest concentration of caves in all of Korea. After the region’s name, Daei-ri, the area is called the Daei Cave Complex. There are seven natural caves in the 6.6-square-kilometer, or 2.5-square-mile, network of limestone caves. Of them, only Daegeum Cave and Hwanseon Cave are open to public.

The entrance of Hwanseon Cave is located 500 meters above sea level. Although it takes 30 minutes to get there from the parking area, a monorail is available that reduces the time to just seven minutes.

As one of the largest limestone caves in Asia, Hwanseon Cave is quite overwhelming. With 6.2 kilometers of caverns, it is like walking through the inside of a giant serpent or a whale, although people are only allowed through 1.6 kilometers of it.

A thermometer just inside said it was eight degrees Celsius, but the deeper we got, the higher the temperature went. Since opening to tourists in 1997, the cave has had more than 10 million visitors.

Daegeum Cave, which only opened in 2007, is adjacent to Hwanseon Cave but is quite different in terms of its appearance and management. Only 720 people are allowed in Daegeum each day because officials say they want to preserve the cave.

People can also ride a monorail in to this cave, located 415 meters above sea level. Although it doesn’t go that fast, the steep incline makes it quite a thrilling experience. Visitors must make a reservation online in advance.

When we got off the monorail, the loud noise of water dripping filled the area. In fact, it was so loud that we could not hear each other talking. We listened to the guide’s explanations through wireless earphones. Apparently, the sound is from Biryong Waterfalls, which fell from eight meters above us.

The sound of water is the most charming aspect of Daegeum Cave. Of the 1.6 kilometer cave, about 800 meters of it is open to the people, and apparently you can hear the sound of water anywhere you go in the cave. The Samcheok authorities only discovered this amazing cave in 2003, opening a cavern that had been closed for 530 million years. “Daegeum” means “gold” in Korean, and the cave’s rock formations seemed particularly beautiful and shiny. Inside, the cave was also lovely and warm.

For Daegeum Cave and its monorail together, it costs 12,000 won for adults and 6,000 won for children.

(Left) Hwanseon Cave in Samcheok, Gangwon, is one of the largest limestone caves in Asia. (Right) Biryong Waterfalls is one of the attractions within Daegeum Cave, which is also in Samcheok. The sound of water can be heard almost everywhere within the cave.

Other caves for sightseeing

There are other caves people can explore, like the lava tubes on Jeju Island. Manjang Cave, at 7,416 meters long, is one of the most famous, as well as the most important geologically.

It takes 40 to 50 minutes to walk the 1-kilometer route along the traces of lava flows. Thanks to its proximity to other tourist attractions like Kimnyoung Maze Park, some 1,300 people visit the cave every month, even during the winter.

If you want to travel with children, we recommend Hwaam Cave in Jeongseon, Gangwon. The location used to be Cheonpo Mine, which operated between 1922 and 1945, but it also connects to a natural limestone cave. Cheonpo Mine was transformed into a tourist-friendly cave in the year 2000, where people can experience what Korea’s old mines used to be like.

It also runs a nighttime horror program in the summer, which has been quite a hit so far. People must go through the pitch-dark mine-cave relying only on a flashlight while fighting off local residents in ghostly costumes.

Baeknyong Cave in Pyeongchang, Gangwon, is a good choice for adventurous people. Opened in 2010, it is 1,875 meters long. It narrowly averted being submerged when the plan to build a dam nearby was scrapped.

Because the cave is not necessarily for sightseeing but for experiencing, there are no lights inside. People wear working clothes and helmets with lanterns while following the guides. In some places people have to feel the way through with their hands.

Only 180 people are allowed in the cave a day, so making online reservations in advance is a must.