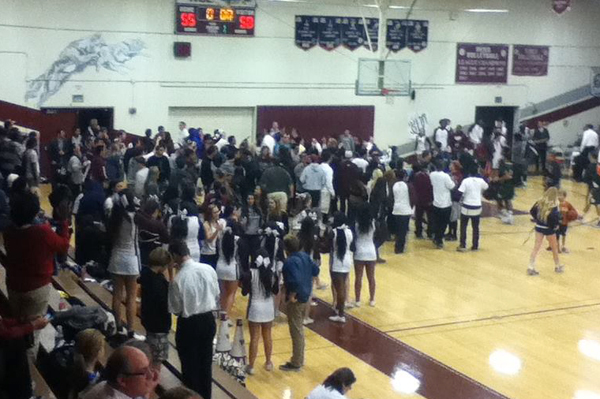 Fans swarm the floor at the Claremont High School’s gym in Claremont, California, after a thrilling 55-50 win against Damien High School. By Sayne Lee

North American high schools and universities traditionally have pep rallies right before their sports games. The captain of the team speaks to the fans about the team’s season and the players’ mindset for that day’s game. The students get pumped up, ready to cheer for their home team.

However, the situation at international schools in Korea is quite the opposite. It seems that most pep rallies go wrong one way or another.

“We do have a pep rally, but it’s not that good,” said Raymond Byeon, a sophomore at Yongsan International School of Seoul.

Pep rallies usually happen before a match, but that rarely happens in Korea. When a pep rally does succeed in creating more spirit, the timing is off and the energy doesn’t carry over to the game or the athletes, according to Brandon Park, a freshman at Korea International School.

Terry Lee, a sophomore at the same school, also said that rallies are not held on game days. “It’s not really related to the sports games,” Lee said.

Non-athlete students were required to attend and watch the rally, which included various games and raffle events planned by the student council. Warm-ups started at about 3 p.m., and tip-off was five minutes later. The gym was packed with students standing shoulder to shoulder.

At the beginning of the game, the atmosphere was great. Everyone was excited, cheering and shouting. Each basket scored by the home team triggered an uproar from the audience. The buzzer signaled the end of the first quarter, and the school bell announcing dismissal went off shortly after.

About three-fourths of the gym immediately filed out. With only one-fourth of the original crowd left, there was hardly any rooting.

Some say that a team’s less-than-mediocre performance can cause problems. The team had a successful season, coming in as runners-up in both the conference and tournament. However, the first pep rallies at APIS were held during the 2012-13 school year, when the core group of senior players graduated and the team plunged into a series of defeats.

Another reason might simply be a lack of bleachers in the school’s gym. When bleachers are available at away games, for instance, there is a higher turnout of students, according to school officials.