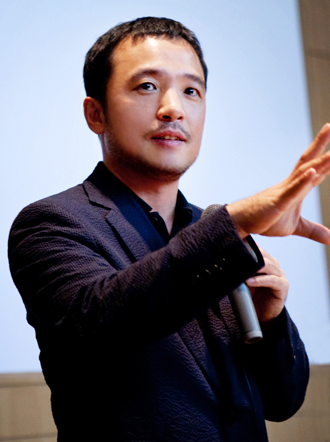 Game giant NCsoft carried out the company’s largest ever executive reshuffle since it was founded in 1997, a shakeup designed to strengthen its global businesses.

Woo Won-sik, the company’s chief technology officer, was promoted to vice president. Woo is known as the co-developer of the Hangul word processing program, along with NCsoft founder and CEO Kim Taek-jin.

In addition, three game developers who were behind the creation of the NCsoft flagship Lineage game series were promoted to executive positions, along with six technical support staff and a managing director.

Lineage still accounts for more than 40 percent of the company’s earnings.

“NCsoft has chosen competent leaders who can lead the company’s global business with core competencies by continually processing and structuring the innovative capabilities of NCsoft,” said a spokesman for the company.

One of NCsoft’s weakness has been its reliance on the domestic market, and with local earnings shrinking, the game company has been trying to grow abroad.

Allowing rival Nexon to become NCsoft’s top shareholder in 2012 is said to be one of the company’s strategies for reaching consumers abroad because of Nexon’s competitive edge globally. 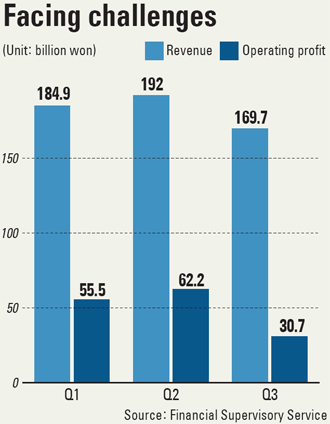 However, observers point out that the situation isn’t too bad for the company because the gamemaker is projected to grow significantly in China.

Woori Investment and Securities made a more positive forecast, saying NCsoft’s 2013 revenue would increase 44.4 percent from a year earlier to more than 1 trillion won, and its operating profit would rise more than 126.7 percent to 486.8 billion won.

So far, NCsoft has earned 122.5 billion won from Blade & Soul, which was introduced in China in November. It is expected to be a long-term hit in China and North American.

“Due to significantly lowered expectations, some good news is boosting a growth in share price, which hit bottom last year,” said an analyst at a local securities company.
“With the news of NCsoft’s Chinese Blade & Soul posting 1.5 million simultaneous logins, its share price rose significantly this year.”