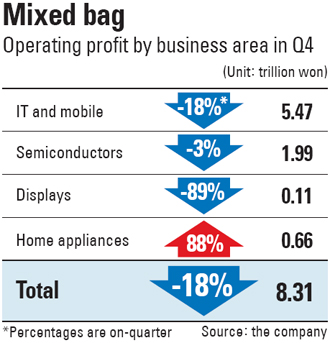 But the continuing challenge from Apple, its Chinese competitors and the strong Korean won contributed to Samsung posting its first quarterly net-profit decline in more than two years, and the company projects a tough first half of 2014 amid the slow growth of smartphone sales.

The company also attributed the fourth-quarter slump to hefty bonus payments to its employees.

Samsung’s yearly revenue surpassed 200 trillion won for the second straight year. The company said it posted 228.7 trillion won in revenue in 2013, up 13.7 percent from a year earlier - its previous record high.

It was the first time the company’s annual operating profit and net profit exceeded 30 trillion won. In 2012, they were 29.1 trillion won and 23.9 trillion won, respectively.

The company’s performance in the previous quarter, however, dampened its celebratory mood. Its net profit in the quarter that ended on Dec. 31 was 7.3 trillion won, down 11 percent from 8.2 trillion won in its record-high third quarter. It was the first time in nine quarters that net profit fell against an earlier quarter.

Samsung’s operating profit slid 18.2 percent from the third quarter to 8.3 trillion won. Compared to the same quarter a year earlier, it was 6 percent less. Its revenue inched up 0.3 percent quarter-on-quarter and 5.7 percent year-on-year to 59.3 trillion won in the fourth quarter.

In its earnings guidance on Jan. 7, the company projected its sales and operating profit in the fourth quarter to be 59 trillion won and 8.3 trillion won, respectively.

“Sluggish sales of smartphones and displays took a toll on its performance,” said Peter Lee, an analyst with Woori Investment and Securities.

Its operating profit from the display panel unit plunged 89 percent in the third quarter to 110 billion. Year-on-year, the company suffered a 7 percent decline in operating profit in displays.

The slump in the global TV market, in which Samsung leads globally, also affected display sales. Its consumer electronics division, which sells home appliances such as TVs, logged 88 percent quarter-to-quarter growth in operating profit, up to 700 billion won.

But the division’s operating profit for the year was 1.67 trillion won, down 28 percent from a year earlier.

Lee Sun-tae, a researcher at NH Investment and Securities, said the fourth quarter reflected fatigue in Samsung’s remarkable growth in smartphone sales. “It won’t be getting much worse than now, but it won’t be that much different,” Lee said.

Samsung claimed that the fourth quarter was still a “strong” performance when taking into account the 800 billion won it doled out to its employees in bonuses to reward them for the company’s best year ever. Samsung also celebrated the 20th anniversary of chairman Lee Kun-hee’s New Management initiative.

The company estimated that the appreciation of the won also caused it to lose 700 billion won.

Many other Korean companies blamed the strong won for their declining earnings. Hyundai Motor, the country’s second-largest exporter, saw its operating profit and net profit drop by 1.5 percent and 0.7 percent, respectively, last year from a year earlier.

“Looking at the quarterly earnings trend, we expect 2014 to follow last year’s pattern of a weak first half and a strong second half,” said Robert Yi, senior vice president and head of investor relations, in a statement.

The company admitted the first quarter will be “challenging,” citing “the weak seasonality of the IT industry.”

But Samsung said it will maintain its leadership in the smartphone business by leveraging its expanded product portfolio across diverse regional markets and price points.

It also said it will introduce more wearable devices following the Galaxy Gear smartwatch and plans to ramp up its tablet lineup.

Some market watchers saw Samsung’s slow growth as a long-term problem of the saturation of the smartphone market.

Song Myung-sub, a researcher at Hi Investment and Securities, said Samsung needs to come up with new, innovative products.

Lee at Woori Investment and Securities predicted Samsung will release its Galaxy S5 in the second quarter, but it will be more of an upgrade from the S4.