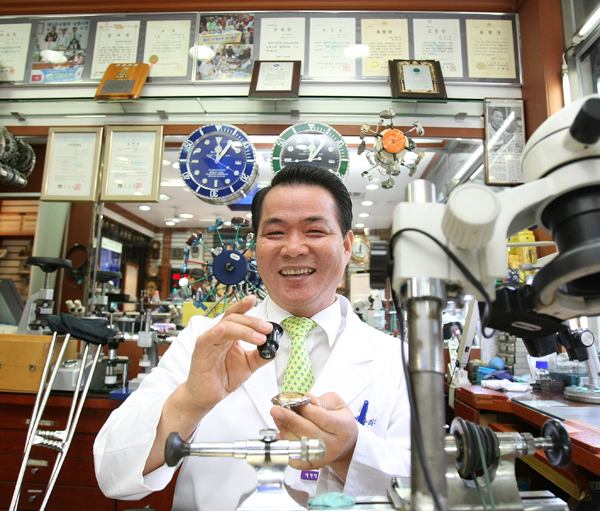 Jang Tae-ho, 53, is the owner of Taeseongdang, a clock-repair store in Daegu. He has donated to welfare facilities for 31 years. “Sharing with others is my hobby,” Jang said. By Gong Jeong-sik

Jang Tae-ho can’t recall much of his life before his parents sent him away. He knows that he was born in Pohang, North Gyeongsang, and that he was stricken with polio at age 4.

His parents couldn’t afford the cost of treatment, he said, so they left him at an orphanage that was part of a local convent.

The other children there bullied him mercilessly for his physical handicap, and he was eventually moved to the Seongbo Rehabilitation Center in Daegu. Jang spent much of his childhood at the facility, where he took a two-year vocational training course on clock and watch repair and maintenance.

“When I was a teenager, I left the center once [to see if I could] make it on my own,” said Jang, now 53 years old. “But I couldn’t get a job because of my disability.”

He lived on the street but found himself tormented by others again because of his condition. Distraught and out of options, he decided to return to the rehabilitation center.

The experience marked a turning point in his life, and “that is when I decided that no one should starve [or be without],” he said.

In 1983, after working as an apprentice, Jang landed a job as a watch repairman in Geochang, South Gyeongsang. So he spent about 70,000 won ($65) - nearly half of his monthly wage of 150,000 won - and bought an abundance of bread, returning to the facility where he grew up and offering it as a donation.

After he opened his own store, Taeseongdang in Daegu, and his salary increased, Jang continued to give back. He upped his donations from 70,000 won per month to 700,000 won. He used the extra income to provide supplies to the center and two other orphanages, while also taking care of the living expenses of five disadvantaged children.

Jang also visits nursing homes on occasion, always with food in tow. And once or twice a week, he teaches clock and watch repair to orphans and the disabled. So far, about 80 people under his supervision have gone on to work as horologists.

For years he continued to give back to the community, and he eventually married. But it wasn’t until 2011, when Jang applied for a master’s certification in watch repair, that he took the time to quantify his service. Over the years, he determined that his contributions added up to about 230 million won.

Ultimately, the certification system for watch repair was eliminated shortly after Jang submitted his evaluation. But despite that bump in the road, he continues to utilize his time helping others.

“I have no kids, so I have been able to save some money, even while donating,” Jang said. “Someday I will start a small welfare facility, where no one will starve, and the people there can learn clock- and watch-repair techniques.”