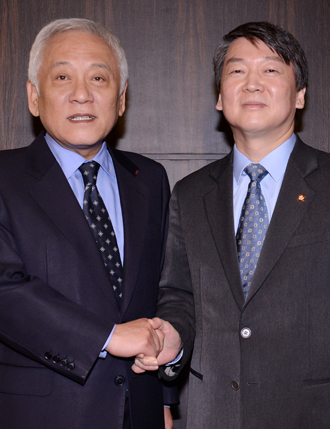 The two discussed outstanding political issues amid speculation over whether they will be able to form a united front against the ruling party in the June polls.

Ahn and the DP leader agreed to continue cooperating on political reform and to pursue the truth behind allegations of hanky panky during the 2012 presidential election.

They called for a separate prosecutorial investigation into accusations that the National Intelligence Service, the nation’s top spy agency, and the military interfered in the presidential race by slandering the main opposition candidate Moon Jae-in.

However, the two lawmakers did not discuss whether they would join forces to support common candidates in the upcoming local elections.

Kim told reporters ahead of the talks, “Right now is not the time to discuss a coalition or a merger.”

“A coalition is a defeatist viewpoint from someone who does not believe he can win alone,” he said later.

Ahn and Kim, in the closed-door luncheon, also discussed how to respond to the ruling Saenuri Party’s plan to maintain a controversial candidate nomination system for the local elections, according to their spokesmen.

The Saenuri Party is on the brink of reneging on its presidential campaign promise to scrap the party’s 20-year right to nominate candidates for municipal offices and city councils in local elections, which has been criticized as a breeding ground of money-for-nomination scandals.

The party said that without the party’s nomination system, there was a high possibility that unqualified candidates would run for local offices due to a lack of an official vetting process. “[Ahn and Kim] share the view that the people will be the judge of the current governing power for repeating old politics,” their spokesman said afterward.

These were the first one-on-one talks between the two lawmakers since Kim became chairman of the main opposition party last May. Ahn earlier this week said he plans to launch a new political party in March and take part in the June elections.

In the 2012 presidential elections, Ahn withdrew his candidacy at the last minute to lend support to Moon, the DP’s presidential candidate.

Some pointed out that Ahn and Kim’s meeting today showed a united front in and of itself.

“Chairman Kim Han-gill did not specifically mention a coalition but the point of today’s talks was to recognize that it is very important to judge the current administration,” a prominent member of the Democratic Party said. “That a coalition is needed for victory in the local elections was relayed in an indirect way.”

Meanwhile, the Saenuri Party was critical of the luncheon and Yoon Sang-hyun, deputy floor leader of the party, argued that the meeting was just a ploy to “share candidates for the local elections.”