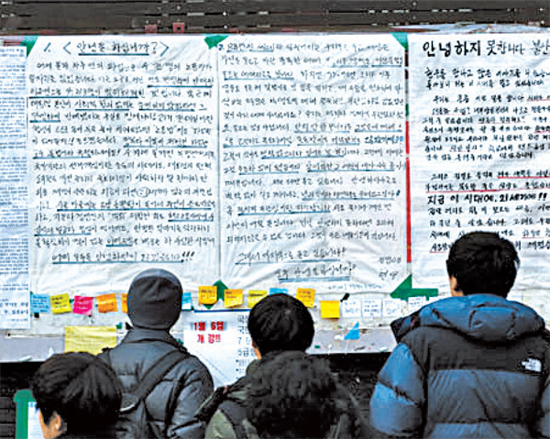 The narrow hallway is jam-packed with students in matching uniforms, and all of them seem to be trying hard to read something posted on the wall.

A teacher, looking perplexed by the mass of gathered students, squeezes himself into the crowd and gets closer to the sheet of paper. Without hesitation, he tears the daejabo, or hand-written poster, from the wall and dismisses the students with anger.

“I don’t think teenagers are ready to have these kinds of talks involving social issues,” said Jung, an 18-year-old high school student. “We are still too young to discuss these sensitive issues.”

Daejabo is a Korean word for a big-character poster that expresses the writer’s views and claims about a particular subject. The movement disappeared after university-student-led demonstrations for democracy, in which posters were widely used by students as a means of communication during the 1980s.

The second generation of these posters started from Dec.10, initiated by two daejabo tacked onto a bulletin board near the gate of Korea University, running through recent, problematic social issues.

According to a survey conducted by JTBC of 700 adults via phone calls, 53 percent of participants approved of teenagers being interested in the daejabo phenomenon, regarding it as freedom of speech. Twenty-three percent of the respondents opposed the participation of minors, however, stating that “students should fulfill their duties to study” and “students are being used politically.”

The posters at Korea University soon fired up other university undergraduates, as well as many younger students, who began participating in the movement by either physically putting up a poster or sharing pictures of them on social media.

The popularity of daejabo has been attributed to the characteristic that there are no constraints to creating similar posters. The convenience of the posters has played an important role since they only require a piece of paper, a pen and a wall to post on.

University students in the past chose this method due to the government’s control over the media. It was their only means to convey their dissatisfaction of society.

However, the new posters are quite different. The re-emerged posters vary significantly from those plastered on college campuses in the 1980s because university undergraduates back then were already interested in politics. Nowadays, students are more apathetic when it comes to social affairs, yet the daejabo movement is raising their social awareness.

The Ministry of Education determined that it is unnecessary for students to worry about politics. It gave orders to each province’s superintendent of education on Dec. 22, stating, “Ensure students concentrate on their studies, for there are concerns that some students may harm the atmosphere of schools by putting up posters arguing certain opinions or personal biases about social issues.”

There was also a student from Gaepo High School who distributed 600 copies of paper to his fellow students, arguing that the school violated his rights by taking down the poster he had put up the day before.

Incidents like these led everyone, ranging from children to adults, to become interested in this poster craze, and some of them are still continuing to write their own personal notes.

A history teacher at Chungshin Girls’ High School, surnamed Lee, said, “Since the arrival of the information society and with the bombardment of various media people can use, the fact that people are relying less on paper than the past is considered natural.

“That is why the reappearance of the posters should be understood as a symbol of communication rather than just another kind of medium people use to express their opinion.”

Regarding teachers and schools withdrawing the posters, she voiced her dissent. “I will support the posters to be held in schools as long as there is plausibility and sincerity in the posters,” Lee said.

Kwak No-hyun, Seoul’s former superintendent of education, said: “What really is rebellious in a democratic society, in fact, is the official document sent by the ministry. It is anachronistic to refer the simple behaviors of students as ‘certain opinions’ or ‘biased posters’ in the document.”

Even after the order from the Ministry of Education, Ham, a teacher from Anyang Foreign Language High School, said, “Students are trying to get involved in showing their opinions to the public, so why should we care? Students, in order to form their own views, should keep listening to what is going on around them.”

However, Korean society seems to consider students’ intervention in political views as unnecessary.

But France appears to have taken the opposite stance.

“Can people behave adequately without being interested in politics?” asked one of the questions in the 2013 baccalaureate, France’s university entrance exam.