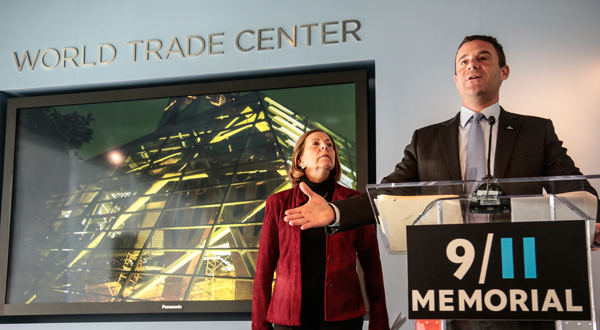 Alice Greenwald, director of the National September 11 Memorial and Museum, left, listens as Joseph Daniels, president of the memorial and the museum, speaks during a press conference on Friday in New York. [AP/NEWSIS]

NEW YORK - A museum dedicated to victims of the Sept. 11, 2001, terror attacks will open to the public in mid-May in a giant cavern beneath the World Trade Center site - with a world-class admissions price of $24.

The opening has been delayed for years due to funding disputes, engineering challenges and a nearly disastrous flood. Joseph Daniels, the National September 11 Memorial and Museum president, said Friday that tickets would go on sale for the museum in March for the spring opening.

The $24 price is in line with other major tourist attractions in New York City. It costs $18 to take a ferry to the Statue of Liberty, $25 to see the Museum of Modern Art and $27 to visit the observation deck of the Empire State Building.

But the fee drew protests from critics, including some relatives of 9/11 victims, who said the high price would keep average Americans out. Unlike many other big museums in the city, there won’t be the option of paying less than the “suggested donation.”

New York City Mayor Bill de Blasio was among those who expressed displeasure.

“I’d like to see them do better,” he told reporters Friday. But he also said the best way to lower the admissions charge would be for the federal government to cover a portion of the museum’s operating expenses.

“I think we deserve substantial federal funding at this museum,” de Blasio said. “What could be a more nationally important site than this? It’s a national tragedy and people come from all over the country, all over the world, to see it.”

Under the pricing plan approved by the foundation’s board, there will be no admission charge for relatives of 9/11 victims or for many thousands of construction workers, police officers, firefighters and others who assisted in the rescue and cleanup operation at ground zero. Children age 5 and under will also get in for free. Admission will also be free for everyone between the hours of 5 p.m. and 8 p.m. on Tuesdays.

There will continue to be no charge to enter the World Trade Center memorial plaza, which is already open. About 5.3 million people visited the plaza this year to see the two huge fountains that sit in the original footprints of the twin towers.

The foundation set an annual budget Thursday of $63 million to operate the museum and plaza. As of now, all of that money will have to come from admissions fees and private donations.

Some 9/11 families have been critical of the foundation, saying the steep ticket charge is a disgrace. Retired Deputy Fire Chief Jim Riches and Sally Regenhard, who each lost firefighter sons in the attacks, have lobbied for the entire site to be turned over to the National Parks Service.

“It was never intended to be a revenue-generating tourist attraction with a prohibitive budget and entrance fee,” they said in a statement.

But Charles Wolf, who lost his wife in the attacks, said he supported the admissions charge “100 percent,” because he wanted assurances that the museum will still be operating in 100 years.

“The only way to do that is to be financially responsible,” he said.

Daniels said he didn’t think the price was excessive, though he acknowledged that “it’s not an inexpensive trip for a family to come here.” He said that if federal, state or city funding does emerge, the foundation would consider lowering the entrance fee.

Planners had originally hoped that the museum could open on the 10th anniversary of the Sept. 11 attacks. Construction delays were exacerbated by a funding dispute with the Port Authority of New York and New Jersey that stopped all work for nearly a year, and by severe flooding caused by Superstorm Sandy last year.