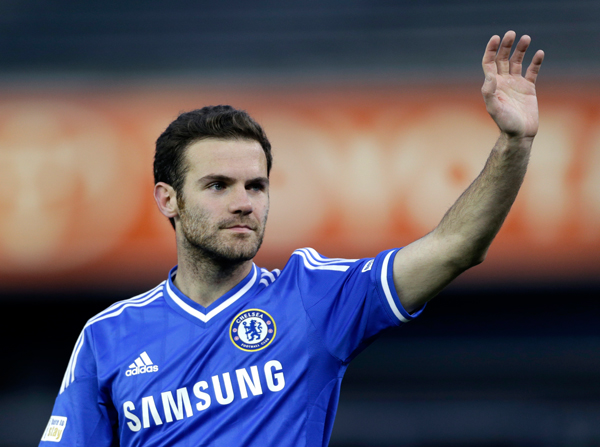 “I am thrilled to be joining United,” the 25-year-old told the club’s website on Saturday.

“I have enjoyed some very happy years at Chelsea, but the time has come for a new challenge. United is the perfect place for me, and I am excited at the chance I have to be part of the next phase in the club’s history.”

Mata claimed the Player of the Year award in his first two seasons at Chelsea, helping the Londoners win the 2012 Champions League and 2013 Europa League, but has been out of favor this season under Manager Jose Mourinho.

The Portuguese has preferred Brazilian internationals Oscar and Willian and Belgium winger Eden Hazard in the three creative positions behind the lone striker, leaving the Spaniard short of game time as he seeks a spot in the World Cup squad for Brazil in June.

“Chelsea is a top club and I have many friends there, but you cannot turn down the chance to join Manchester United,” said the midfielder who was the darling of the crowd at Stamford Bridge.

“I look forward to helping the manager [David Moyes] and the team be successful in the coming years.”

Mata, who has played 30 times for his country, joined Chelsea from Valencia for 23.5 million pounds in August 2011.

The signing is a major fillip for Premier League champions United who are out of the Capital One Cup and the FA Cup.

Moyes’s team are also languishing in seventh place in the league table, 14 points behind leader Arsenal.

They are still in the Champions League although current form would suggest they have little chance of winning that competition.

“Juan is one of the finest playmakers in the game today, and it’s a real pleasure to have secured his signature,” said Moyes, who has had a torrid spell since taking over when Alex Ferguson retired in the close season.

“He’s been instrumental in Chelsea’s recent success with a notable 28 assists and 32 goals in his last two Premier League seasons. I have been impressed with the excitement he has shown to be part of the new Manchester United.

“I know our fans have admired Juan for some time now - he has always played well against us - and I know they will be delighted to see him in the red of United.”