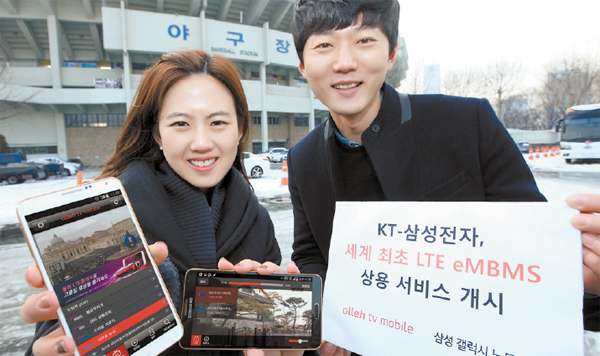 KT and Samsung yesterday both launched the “world’s first commercial eMBMS,” or evolved multimedia broadcast and multicast service. KT’s LTE subscribers can use the eMBMS service on the Samsung Galaxy Note 3 today. [NEWSIS]

Just in time for the inauguration of former Samsung Electronics chief Hwang Chang-gyu as CEO today, KT yesterday announced a new service it developed with the electronics giant.

Some saw the move as signaling a change in the relationship between the companies that has been depicted as anything from indifference to hostility.

KT is launching the “world’s first commercial eMBMS,” or evolved multimedia broadcast and multicast service. KT’s LTE subscribers can use the service on the Samsung Galaxy Note 3 starting today.

The technology, which KT branded as Olleh-LTE Play, offers significantly higher quality video than standard digital multimedia broadcasting, according to the companies. It also enables subscribers in densely populated areas such as sports stadiums or concert halls to access multiple broadcast cameras at various angles without delays or disconnection, they said.

The two companies said they have worked together for a number of years to develop and commercialize the technology, which was introduced at the Mobile World Congress in February 2013.

KT, a former telecommunications monopoly, provided Samsung’s corded telephone with service in the past, but their relationship turned sour in November 2009 when KT introduced the iPhone in Korea.

Seizing the chance, SK Telecom deepened its cooperation with Samsung, a collaboration that continued from the sales of the Omnia phone, Samsung’ early smartphone lineup, to the Galaxy series.

But there have been signs of cracks in the SK-Samsung partnership over a proposed bill aimed at improving the distribution structure of handsets.

The bill, which failed to pass the National Assembly last year and is to be considered again at an interim session next month, aims to curb pricing competition among the companies that sell handsets and is supported by the mobile carriers.

Samsung, which manufactures nearly 70 percent of the smartphones sold in Korea, opposes the bill for a number of reasons, including the company’s belief that it could decrease the whole handset market.

Samsung sees SK as a driving force behind the bill, according to some market watchers.

A Samsung partnership also would benefit KT, whose slump in the mobile business has been years in the making.

KT predicted its operating profits in the fourth quarter of 2013 would be 119.9 billion won ($111.1 million), down 61 percent from the previous quarter, while its net profit would fall 58.61 percent to 56.4 billion won for the same time period.

KT’s market share has dwindled over the past two years, while LG U+, the No. 3 carrier, has reached nearly 20 percent.

Hwang, who contributed to Samsung’s remarkable growth in semiconductors in the 2000s, is expected to utilize his Samsung ties in his new position.

Samsung plans to further strengthen its partnership with KT through joint marketing campaigns, the company said in a statement.