Shopping by mobile is booming

Shopping by mobile is booming 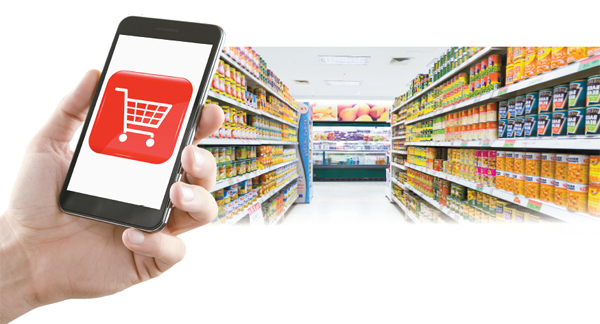 Until recently, Park Gil-hyun, a 43-year-old homemaker, knew nothing about mobile shopping. She didn’t have a single account at any of the popular online shopping malls. She has plenty of discount and department stores near her home in Pyeongchon, Gyeonggi. Why shop in front of a computer when you can see and touch the merchandise at a store?

Park’s attitude started to change when she bought a new smartphone and learned about mobile shopping. She signed up for membership at online shopping malls like 11Street and social commerce sites like Ticket Monster. Park now shops constantly on her mobile device. A few stabs at the screen and she has bought her fifth-grade son a toy.

“I feel mobile shopping is more convenient because I’m able to shop easily whenever I want to and have some spare time,” Park said. “Plus the prices are definitely cheaper. These days, I often scroll down my touch screen to shop for foreign kitchenware items.”

Park is one of a growing number of mobile shoppers in Korea. And she is one of the army of consumers who turned to mobile shopping straight from shopping in brick-and-mortar stores, without shopping online using personal computers first as per the previous generation.

According to 11Street, a local online shopping mall, the percentage of consumers who first signed up for membership to its site through mobile devices jumped from 5 percent in 2012 to 20 percent last year, quadrupling in just one year.

In 2013, 11Street conducted a study of customers who use mobile devices and found that three out of four used smartphones only to access the mall.

Younger consumers were more likely to rely on mobile devices rather than PCs. According to the study, 60 percent of 11Street’s online members aged between 15 and 34 shop using mobile devices exclusively.

Industry experts say mobile shopping is attractive because it can be done anywhere and at any time.

Bae Moon-young, a 35-year-old homemaker from Ilsan, Gyeonggi, doesn’t have time to shop at her desktop. 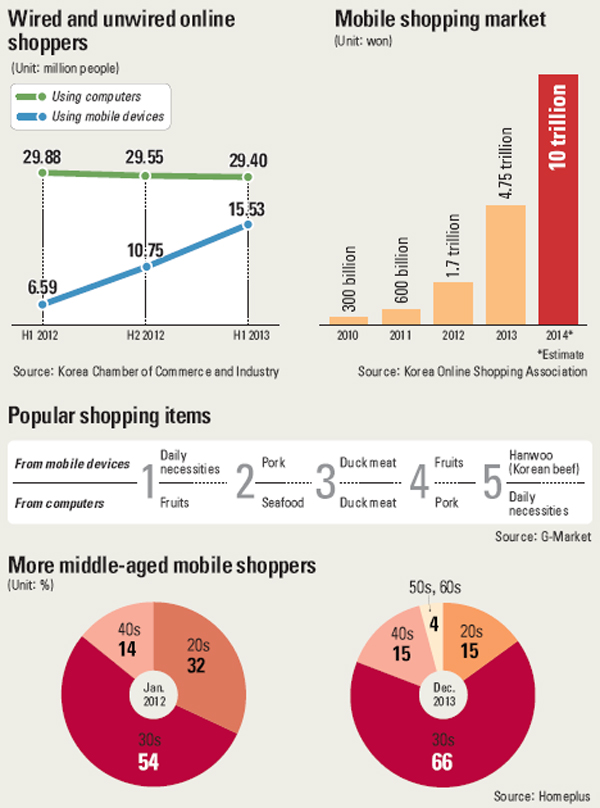 “I have a 17-month-old son, and having to look after him makes it very difficult for me to do online shopping using a computer,” she said. Bae would have to put the baby to sleep, but she usually falls asleep too when she does that.

“For mobile shopping, I can put the baby to sleep in one arm and use my other hand to shop with my smartphone,” Bae said. “I buy powdered formula, diapers and detergent, things I buy so often that I don’t have to pick and choose. The prices are also cheaper on mobile.”

Middle-aged consumers are growing fond of mobile shopping since bigger screens were introduced on devices like the Galaxy Note. Competition among mobile carriers to introduce faster networks has also contributed to a strong infrastructure for mobile shopping.

Retailers see the mobile shopping market as a next-generation growth engine. They are expanding investment, and the competition among them is lowering the commission fees charged to consumers.

This year, the association expects the volume to reach a more than 10 trillion won mark, which is higher than the television home-shopping market.

According to online shopping malls, the things consumers buy using their mobile devices and personal computers are different.

“We have seen a rise in sales of daily necessities among mobile consumers, especially before the approaching Lunar New Year holiday,” said Park Hyuk, a marketing officer at Gmarket. “Items like shampoo, conditioner and toothpaste, which consumers can buy without detailed information.”

People shopping online via computers, on the other hand, prefer items like fruit, which require careful comparison.

A lot of mobile shopping is centered around so-called social commerce sites like Coupang, Ticket Monster and WeMakePrice.

With the growth in shopping via smartphone, major retailers like department and discount stores are taking notice.

Retailers are particularly targeting consumers who make purchases through their mobile devices on their way to or from work.

Jung Jae-young, 37, says she does her shopping on her Galaxy Note during her twice-a-day, one-hour commute to and from Seoul Station.

According to E-Mart, commuters are a substantial portion of its mobile customers, accounting for twenty-six percent of shoppers in the mornings and 21 percent in the evenings.

“Once we opened up our exclusive mobile app, sales, which only accounted for 1.5 percent [of overall online sales] in 2012 shot up to 13.5 percent at the end of last year,” said Choi Woo-jeong, an E-Mart executive for the online business. “We expect this figure to expand to around 20 percent.”

Homeplus said sales made on mobile devices last year accounted for 25 percent of its online sales. It forecast the ratio to exceed 30 percent by the end of this year. Those sales have tripled from 14.9 billion won in 2012 to 45 billion won.

Lotte Mart recently upgraded its mobile app after its number of users more than doubled.

“But mobile shopping has consistently grown.”

Galleria Department Store is taking a different approach by publishing a digital magazine for mobile devices to attract customers.

“We not only provide information on the latest luxury trends but also offer high-end goods exclusively for our app users,” said a Galleria spokesman.