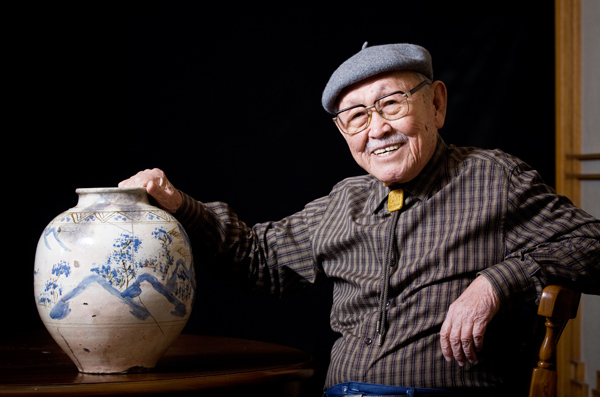 For Hong Ki-dae, antiques have been his life and a source of living.

It was by accident that the 92-year-old Hong, who is also known by his pen name Udang, began working at Koohasanbang, a store that sells antiques, paper, writing brushes and ink sticks.

He was just 14 years old at the time.

Since then, the 100-year-old, legendary shop in Insa-dong became his destiny. After years of rising through the ranks, he eventually became the store’s executive manager. He has since retired.

Besides running the shop, his influence in Korea’s ancient art world grew to the point where it’s easy to say that the collections in the Kansong Museum, the Leeum, Samsung Museum of Art and the National Museum of Korea can be attributed to Hong’s work.

Those values helped Hong to become “a legend in Insa-dong.”

Although he had kept his mouth closed for many years, saying that it could have unwanted effects on his clients, he finally opened up and shared his stories through a book called “Eighty Years with White Porcelain from Joseon Dynasty.”

In an interview with the JoongAng Ilbo earlier this month in his Hongeun-dong residence, he went all the way back to the days when he suddenly became the head of his household because his father - who was an independence fighter during the Japanese colonization (1910-45) - lived in exile in Manchuria.

He gave up going to middle school and got a job at Koohasanbang. It turned out to be a great coincidence.

He was paid 8 won a month, which was good enough to buy one straw bag of rice back then. The rate was also higher than a waiter or waitress, who were paid 5 won a month.

“I sometimes wonder, ‘How would my life have turned out if I had another job, like a delivery guy or something?’?” Hong said. “Back then, I never knew how my first job would enrich my life and make me so content.”

He also often made deliveries to legendary art collector Jeon Hyeong-pil (1906-62), the founder of Kansong. 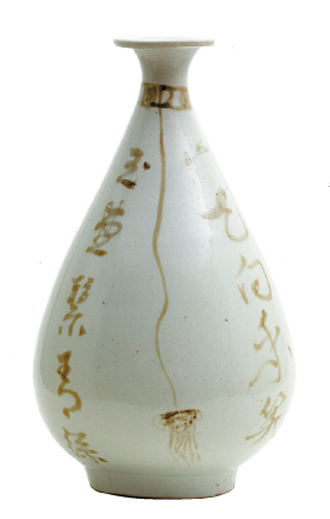 A 15th-century white porcelain vase is painted with what looks like a string around its neck that hangs down. It was part of a recent exhibition held to celebrate the publication of Hong’s book, “Eighty Years with White Porcelain from Joseon Dynasty.”

A. He was quiet, gentle, yet meticulous. I know that he faced many criticisms within his family for his passion for buying antiques [particularly so that they wouldn’t be bought by Japanese or other foreigners and be displaced forever].

Some even said “the adopted son is bringing down the entire family” [because Jeon was adopted to his uncle’s family, which had no son]. When I was 14, he was 29. To have such a conviction to protect and preserve Korean antiques at such a young age is quite amazing. That is what made him who he is today.

After Korea’s liberation from Japan, the antiques that some Japanese left behind were sold on the streets of Chungmuro.

And during the 1950-53 Korean War, antique sellers took only the most precious artifacts when they fled to Busan and held auctions there.

“They were harsh, yet splendid days,” Hong said. It was also then that he met Son Jae-hyeong (1903-81), one of the leading Korean collectors during the Japanese colonization, along with Jeon Hyeong-pil.

How did you get involved in the Leeum collection?

Many merchants frequented the house. I didn’t feel the need to be one of them, but one person asked me to pay a visit there. I said, in passing, “Well, why don’t you tell them to send me an invitation card?” They actually did. They were a young couple who had a deep interest in ancient art.

Since the first encounter, they came to my house, looked at my ceramics collection, and then continued the conversation at their house - and we did that for 10 days. That was the start of the relationship. The couple is Lee Kun-hee [Samsung Electronics chairman] and Hong Ra-hee [director general of the Leeum].

He traveled to cities like Tokyo and New York in the 1970s and bought Korean antiques at the request of Chairman Lee. It was also Hong Ki-dae that persuaded Lee to buy many of Son Jae-hyeong’s antiques, which were on the verge of being dispersed throughout foreign countries due to his long struggle with a disease. They include the 12th-century Celadon Ink Stone (National Treasure No. 1,382) and the 19th-century Blue and White Porcelain Bottle. 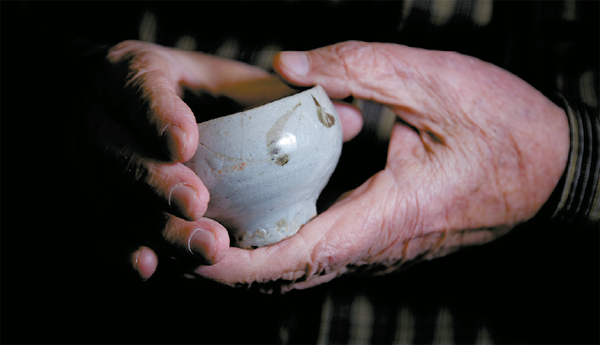 Hong said while most collectors looked for fancy celadon pieces or impeccable ceramic works, he was attracted to Joseon-era white porcelain, including pieces that were so simple to the point they looked boring and those with flaws.

For many years, Korea’s ancient artworks have been undervalued compared with those from China and Japan. For instance, the most expensive Korean antique sold at an overseas auction is an 18th-century white porcelain piece with a blue dragon, sold for $8.41 million at Christie’s in 1996. That record has yet to be broken. Why do you think Korea’s ancient artworks are so underappreciated overseas?

It’s about national power. The value of an artwork is often proportional to the power of the country where it’s from.

Blue and white porcelain pieces from the Joseon Dynasty (1392-1910) are the best from Korea. However, in terms of price, they are not so expensive. What’s worse, they are scarce and many of them are already part of museums’ collections so we would see less of them in the market.

Today, most of the collectors, literati, artists, calligraphers and merchants Hong worked with have passed away.

Hong is one of the few left to tell the stories of their lives as well as the things they collected and cherished, which are scattered all around.

In your 80-year career in the world of Korean antiques, what do you regret or feel sad about?

I saw so many antiques. However, there are many that were dispersed due to the war because their owners just didn’t have what it took to keep them.

The more I think of that, the sadder I become.