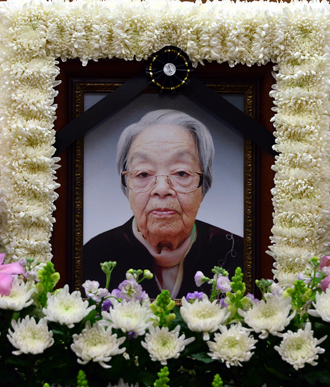 A 90-year-old Korean woman who was forced into sexual slavery by the Japanese military during World War II died of old age yesterday, leaving only 55 known survivors in Korea.

Born in South Hamgyong Province in what is now North Korean territory, Hwang had no relatives or family in South Korea, aside from an adopted son, a South Korean man who worked as a social worker for the local district office and helped her.

Without a regular job, she made a living by collecting recyclable bottles and papers and selling them to local recycling centers. She also received the basic living allowance from the government of about 400,000 won, or $370, per month.

Despite being poor her whole life, Hwang was able to donate 100 million won over her lifetime to a scholarship fund by saving her government subsidies and the money she earned from recycling, earning her honors from the Gangseo District Office in 2011.

Upon her death, Hwang’s assets were estimated to be worth about 50 million won, which she said in 2011 she would also donate.

A local social worker, Jo Myeong-rim, said Hwang always told her that she would have helped more underprivileged students if she had received compensation from the Japanese government.

South Korea has called for an official apology and compensation from Japan for its wartime atrocities against the so-called comfort women, who were forced to serve at military brothels during World War II.

The Japanese government, however, claims the 1965 Korea-Japan treaty that normalized relations between the two countries exempts it from paying individual compensation for wrongdoings during its 1910-45 colonial rule of the Korean Peninsula.

The Korean government received about $300 million in aid and $500 million in loans from Japan as part of that agreement.

The Korean government has 237 Korean comfort women registered officially, but only 55 are still alive.

Hwang had suffered from mental illness since 2002, local officials said. Although she took medication and received therapy, she frequently called government offices and the police, calling on them to arrest students wearing school uniforms, thinking they were Japanese soldiers in military uniform.

In addition, twice or three times a month she called the police to say an intruder had entered her house through the window.

“I hope that she is resting now in heaven,” said Kim Myeong-hwan, her adopted son. “It would be better for her if she had received an apology from Japan, but in reality she heard all of the abusive words of the Japanese politicians who would not accept fault.”