Tourists turned on to guesthouses

Tourists turned on to guesthouses 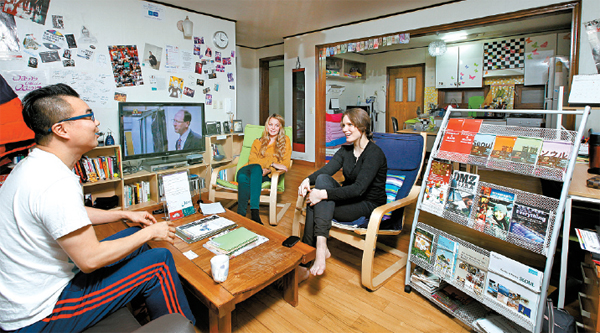 Kim Gyung-rak, left, owner of the Oasis Guesthouse in the Hongdae area, Seoul, talks on Jan. 16 with some foreign guests. By Park Sang-moon

With an increasing number of foreign tourists visiting Seoul and a shortage of hotel rooms, more Koreans are opening guesthouses to offer visitors a homier holiday for a cheaper price.

Kim Gyung-rak, 47, was a successful interior designer who retired in 2011. A year later, he opened a guesthouse in a rented house in Hongdae, the bustling shopping, clubbing and pop-culture area of western Seoul.

“Opening a guesthouse of my own was always my dream, like the ones I read about in ‘Lonely Planet,’” Kim said. “But I never expected it would be successful as this.”

Kim’s guesthouse is hardly different from an ordinary Korean house except for a sign on the door reading “Oasis,” the name of the business. The two-story house has eight rooms including dormitories and doubles. The nightly rate per guest ranges from 22,000 won ($20.60) to 30,000 won.

Although Kim pays a monthly rent of 3.2 million won, the guesthouse is profitable.

One of the secrets to its success is the hominess that Kim can offer his visitors. Kim, who speaks English, holds a Korean-style drinking party every night in the dining room and urges his guests to bring their own drinks and any friends they may have met.

“I guess the character of the owner of the house is an important factor,” he said. “I love punk rock and the culture of Hongdae, and I have the skills to converse with foreign guests.

“Some Korean guesthouses ban alcohol, but I think that’s too cruel,” he said. “My area is nonsmoking, of course, but never nonalcohol. I love to have a drinking party every night with the guests. They gather here in the dining room and share their traveling experiences and learn something about Korean culture.”

Heng Wee Yeng, a 24-year-old Singaporean student, says he chose to stay in Kim’s guesthouse because he thought other accommodations might prove isolating and lonely. 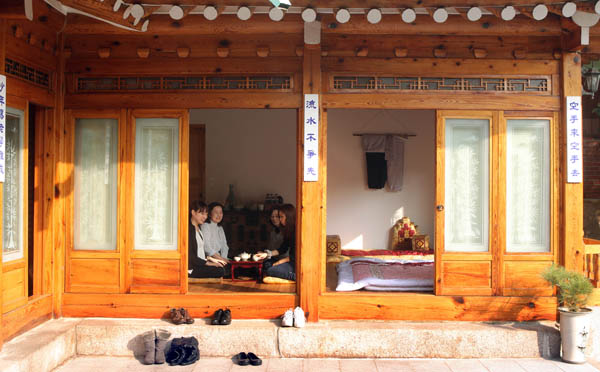 A traditional Korean house, or hanok, is converted into a guesthouse in Bukchon, northern Seoul. By Byun Sun-goo

“I’m traveling alone, so if I stayed in a hotel, I wouldn’t meet any friends,” Heng said. “At a guesthouse you meet other travelers, so it’s actually quite a cool experience. Guesthouses have a very homey feeling.”

“Most of the guests search for accommodation through Booking.com or Airbnb.com,” he said. “Unlike hotels, which are graded by a number of stars, we don’t have any grading system. So we need to get a better rating on the websites through recommendations by people who visited my guesthouse before. A better rating puts your guesthouse on a front page.”

“I searched online on Tripadvisor. com, looking for hostels and guesthouses in Korea,” Yeng said. “I decided to find something in Hongdae and this guesthouse had lower rates. I looked at the reviews and they were great.”

Starting in January 2012, the Korean government made it mandatory for all guesthouses to be registered with the government and be defined as “lodging for foreign tourists” so that they can be promoted through staterun tourism websites.

Under the new guidelines for guesthouses, anyone can register his or her house as a guesthouse for foreign tourists if they meet basic requirements.

The owner should live in the house and its size should not exceed 230 square meters (2,475 square feet). Basic foreign language skills are also required.

After a registration application is filed, a local district government official inspects the house for final approval, checking the safety and security of the facility. 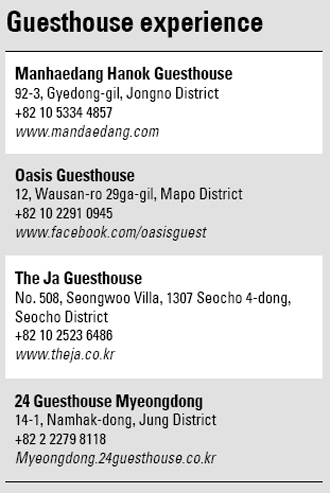 According to the Seoul city government, a total of 360 guesthouses have been registered, and 92 are in the Hongdae area.

According to Oasis owner Kim, lots of guesthouses are not registered with the government. He believes there are actually 200 or 300 guesthouses operating in Hongdae — too many to make any guesthouse a bonanza.

“The number of travelers usually peaks in summer or winter as most of them are university students on their vacations,” he said. “During summer, I had lots of European students, and in winter, students from Southeast Asian countries come to enjoy ski resorts.”

In Bukchon, in the northern part of Seoul, a cluster of hanok, or traditional Korean houses, have been converted into guesthouses offering a truly special experience for foreigners.

“There are about 60 or 70 hanok guesthouses in the Bukchon area, and many foreigners come to experience the hanok culture they have seen in Korean films or television dramas,” said Lee Yu-ri, owner of the Manhaedang Hanokstay guesthouse. “But recently, due to the world economic slowdown, the number of tourists has dropped.”

The economic situations in China and Japan and even North Korea’s unstable politics affect the guesthouse business.

“Most of our guests are from Japan and China, and they want to explore the affluent Gangnam area or use the Express Bus Terminal to visit other cities in Korea,” said Dan Kim, owner of The Ja guesthouse in Gangnam, where about 10 guesthouses are located. “But if the Japanese economy weakens, the number of Japanese tourists drops, which is also true for Chinese tourists.

“Winter is normally a boom season in the guesthouse business,” he continued. “But when North Korean leader Kim Jong-un’s uncle Jang Songthaek was executed in December, I received many cancellations from foreigners who were afraid of the unstable situation on the Korean Peninsula.”

Although the government wants to promote guesthouses to foreign tourists, the new type of accommodation is still unknown to many foreigners.

“Government websites do not help guesthouses because the government sites don’t have a reservation system,” Kim Gyung-rak, the owner of Oasis, said. “Those sites just show my phone number and homepage address.”

“I didn’t know about guesthouses before because they are not well known in France,” said Astrid Monge, a 22-year-old French tourist visiting Seoul for one month who found Oasis through a website. “Maybe the government could highlight the fact that guesthouses exist here in Korea and what the basics of a guesthouse are.”

For Lee, who has run her hanok guesthouse for more than three years, an easy registration process for similar businesses could present a problem in the future. She said such a simple entry into the industry could draw unqualified guesthouses, a decline in the quality of the experience and a decrease in foreign visitors to other guesthouses.

“Many grandmas and ordinary housewives are jumping into this business, renting one of the rooms in their houses, and they are offering low-quality services to foreign tourists,” Lee said. “For instance, some housewives want their children to learn English from foreign guests, which the guest don’t really want to get involved with. They give the entire guesthouse industry a bad image. The government should set strict rules before it authorizes guesthouses.”

The Seoul government says the number of people inquiring about the guesthouse industry is growing.

“Lots of people, particularly those who are retired, are calling us to ask if the business of running a guesthouse is profitable or not,” said Lee Heayjin, chief of the Tourism Business Team of the city-run Seoul Tourism Organization. “Recently, we saw a growing number of guesthouses in Mapo District, including the Hongdae area, run by the younger generation that has experience in traveling abroad and some expertise in online promotion through SNS.”

The Seoul government expects guesthouses to play a role in drawing foreign tourists seeking cheap but friendly accommodation in Seoul.

“The guesthouses are not merely a lodging business but have become a place to experience intimacy with other tourists and Korean residents,” Lee said. “They could become another tourism resource or cultural element of Seoul.”

In 2013, a wave of people attended training programs run by the city government for guesthouse start-ups.

“So far, demand for guesthouses is concentrated in vacation seasons only, and the business is heavily dependent on the abilities of the owners to promote their houses through websites. The facilities are similar everywhere, but the experiences that visitors get are very subjective.”