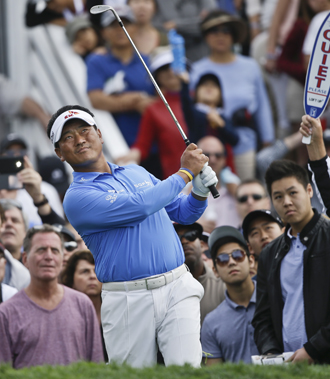 K.J. Choi reacts after hitting a high flop shot from the rough near the 17th green on the South Course during the final round of the Farmers Insurance Open on Sunday in San Diego. Choi finished the tournament at 8-under-par. [AP/NEWSIS]

Scott Stallings moved out of a five-way tie for the lead by shooting a birdie on the final hole on Sunday to win the Farmers Insurance Open.

Choi Kyoung-ju, also known as K.J. Choi, had the best score of the week on the South Course with a 66 and was among those who tied for second. The pins were set up in favorable positions for birdies, making the course play the easiest it had been all week.

Stallings hit a 4-iron with his second shot on the par-5 18th, just clearing the water, then took two putts from 40 feet for birdie and a 4-under 68 at Torrey Pines.

He made six birdies over his last 11 holes, along with a pair of bogeys. Most remarkable is that he managed to hit only four fairways in the final round. But one that he did was important; the 537-yard closing hole.

That was enough for a 9-under 279 and a one-shot victory when no one could catch him.

It was the third career PGA Tour victory for Stallings, who earned a return trip to the Masters and should move high enough in the world rankings to qualify for the Match Play Championship next month in Arizona.

But that was not quite easy enough for Gary Woodland, Jordan Spieth, Pat Perez and so many others who squandered a good chance to win.

Woodland appeared to have the best chance to catch Stallings. He was one shot behind - with plenty of length to reach the 18th in two - but hooked his drive badly at No. 17 and, feeling he needed to make his 45-foot par putt to have any chance of winning, he ended up going for too much and three-putted for double bogey. Woodland, who had a one-shot lead going into the final round, then missed an easy birdie attempt on the 18th and closed with a 74.

“This will be hard to swallow,” Woodland said. “I felt like I kind of gave one away today.”

Marc Leishman of Australia had the last chance to force a playoff, but his drive on the 18th went well right and bounced off the cart path and a fan. He had no shot at the green in two, and his wedge for an eagle stopped a few feet to the side of the hole. His tap-in birdie gave him a 71 and a share of second.

Jason Day (68) and Graham DeLaet of Canada (68) each made birdie on the last hole to tie for second. So did Perez, the San Diego native who grew up at Torrey Pines and whose father is the longtime announcer on the first tee at the Farmers Insurance Open. Perez missed a 10-foot birdie chance on the 17th and closed with a 70.

“It’s great and bad,” Perez said about his runner-up finish. “This is the one I want to win more than anything in the world, and I came up short .?.?. I thought today would have been my day. I would like to be in that position again.”

Spieth, 20, did not make a birdie over the last 15 holes, and fell back with consecutive bogeys late in the round. The Texan made a meaningless bogey on the last hole that only cost him a spot in the top 10. By then, his day was over. He closed with a 75.

“I just lost control of the golf ball,” Spieth said.