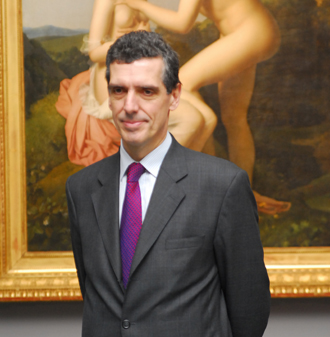 Henri Loyrette, 61, former director of the Louvre Museum in Paris, will be leading the French side of preparations for the 130th anniversary of Korea-France diplomatic relations. [JoongAng Ilbo]

The Louvre Museum in Paris once again was the most visited museum in the world last year, receiving 9.2 million visitors. As impressive as that number is, it was actually down from 2012, when the museum established a world record by attracting 9.7 million visitors.

The man responsible for those numbers was Henri Loyrette, 61, who served as the director of the museum for 13 years until last year. When Loyrette arrived at the Louvre, home to some 12,000 paintings and other art objects, it received about 5.1 million visitors per year. During his 13-year tenure, he managed to almost double that figure.

“I don’t want to boast about [that],” said Loyrette. “What I want people to notice is that half of the visitors now are younger than 30 years of age.”

Loyrette, who’ll be heading the French side of preparations for the 130th anniversary of Korea-France diplomatic relations, says that he wants “people of all ages to consider culture as a daily necessity rather than simply enjoying it as an amusement.

“Culture is interlinked with the society and the economy. We’ll make efforts so that economic value is created through the cultural exchange between the two countries,” said Loyrette last week at the French Embassy in central Seoul.

Loyrette paid a weeklong visit to Seoul as the head of an organizing committee for the “2015-2016 year of mutual exchanges between Korea and France.” He was also the director of the Musee d’Orsay from 1994-2001.

On the Korean side, Cho Yang-ho, CEO of Korean Air, will be heading the committee.

“At the Louvre, the collections are from the Middle Ages to the mid-19th century,” said Loyrette. “Its role is to highlight the cultural heritage of France. Beautiful art works are housed in such a beautiful place. But we must not stop there. From today’s point of view, we have to agonize together. It could be inviting a historian to relook at the artworks. While I was there, we invited famous contemporary musicians like Pierre Boulez to hold concerts. Efforts need to be made in the viewpoint of today’s people to shed new light on the Louvre.”

Similarly, Loyrette says he’ll “make efforts to attract those who believe, ‘I’m not interested in culture,’ and that they feel that culture is a necessity in our lives.”

The mutual exchange project, which launches next year, will include collaborations and innovations. Although details are not ready yet, Loyrette said they are “looking into producing a collaborative film and exchanging modern artists.”

“We may graft Korean traditional music to baroque music, or we can get a French director to direct a pansori performance,” said Loyrette. “We are not just going to show or exchange works that are already completed. We’ll agonize together and create together.”