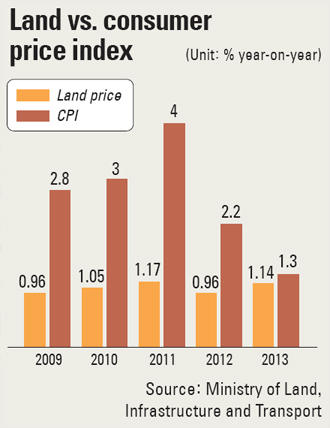 According to the ministry, the cost of land has been relatively stable for the past six years, increasing less than the consumer price index (CPI). The ministry data shows that the CPI grew 1.3 percent in 2013.

Sejong City saw the largest increase in land prices for the second consecutive year, with 5.5 percent growth in 2013. The city has been designated as the administrative center for the country, and the arrival of government agencies and new infrastructure has boosted land values, said the ministry.

Rounding out the top five areas with the largest increases were Hanam in Gyeonggi, Yecheon-gun in North Gyeongsang, and the Songpa and Gangnam districts in southern Seoul.

Meanwhile, the ministry said there were 2.24 million land transactions last year, up 9.6 percent from 2012.