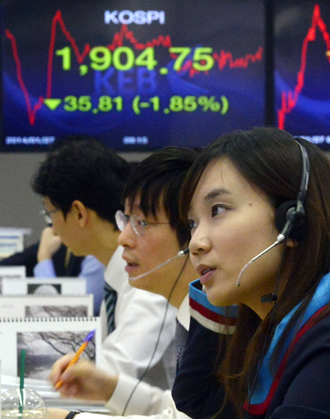 Nervousness about emerging markets had a big impact on the Korean securities market despite the government’s wishful mantra that the impact would be “limited.”

The Kospi, Seoul’s main bourse, opened 2.1 percent lower yesterday, temporarily breaking the 1,900 mark. The drop was mainly due to worries about the depreciating currencies of emerging economies against the U.S. dollar as part of the impact of the U.S. Federal Reserve’s tapering of its bond-buying program.

The market’s retreat was attributable to a three-day selling spree by foreign investors who are clearly worried about other emerging markets around the world. Foreigners sold off 519 billion won ($479 million) worth of local shares yesterday, the largest number in one month.

The government convened emergency meetings over the weekend. Although it claimed the impact would be limited, related agencies agreed to step up their monitoring.

“The Korean market is showing some decoupling signs from other emerging markets, but if market coupling occurs in the future, any country can feel the impact,” Choo Kyung-ho, vice finance minister, told reporters yesterday. “The Kospi fell around 1.5 percentage point, smaller than falls in other Asian markets.

“But we can’t predict how long the market will remain volatile,” he added.

The big question is whether investors will lump Korea in with vulnerable developing economies such as Argentina and Turkey or recognize it as a developed economy and a so-called advanced emerging stock market.

“Due to the Argentine shock, investors’ sentiment turned sour for most emerging markets, but the Korean market showed a relatively small drop compared to other markets in Asia,” said Lee Seon-yeop, a research fellow at Shinhan Investment.

According to Bloomberg yesterday, Asian stocks declined, with the region’s benchmark index heading for its steepest loss since June, as concerns that the global economic recovery is faltering spurred investors to sell riskier assets.

Led by a more than 15 percent drop in the Argentine peso against the U.S. dollar, the currencies of Turkey, Russia, Brazil and Chile depreciated together in the past week. The lira sank 4.4 percent during the week, Russia’s ruble dropped 2.9 percent and South Africa’s rand weakened beyond 11 per dollar for the first time since 2008.

The Korean won also fell 1.9 percent in value over the week.

“Although the Fed tapering is forecast to have a limited impact on the Korean foreign exchange market thanks to the Lunar New Year holiday this week, the rate is showing signs of rising further to 1,090 won but no higher than that,” said an FX research fellow at Hyundai Futures.

Along with the United States’ tapering of its quantitative easing, the fragility of emerging markets’ economies is being emphasized as a commodity boom winds down.

Emerging markets were the darlings of investors after the 2008 global financial crisis and weaknesses in European economies. The emerging markets’ fragility stems largely from deficits in current account balances and short-term external debt, reports said.

According to Bloomberg, Argentina has been posting current-account deficits since 2009, shrinking the country’s foreign reserves to $25 billion as of last year. It is saddled with $20.3 billion in short-term debt.

Turkey has also been suffering trade deficits since 2005, while its debt reached $120 billion. It currently has $106.8 billion in foreign reserves.

A Goldman Sachs report released last month said there needs to be “a significant reassessment of emerging market countries and a strong possibility of significant underperformance and heightened volatility over the next five to 10 years.”