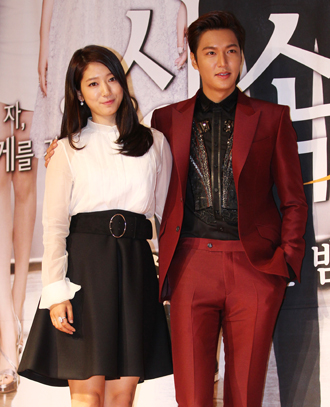 The agencies for stars Park Shin-hye and Lee Min-ho are denying reports from Chinese media outlets that the two have been dating for more than two months.

“Such accusations are not true,” said Park’s agency, S.A.L.T. Entertainment, in a statement. “We are quite puzzled why the Chinese media have reported such a false story.”

Lee’s agency, Starhaus Entertainment, made a similar response. “Min-ho and Shin-hye are good friends and they are also on good terms with the rest of the casts of ‘The Heirs.’ Maybe that’s why some reporters thought they are in a relationship,” said the company’s statement.

Park and Lee, who played a popular couple on the SBS drama “The Heirs,” have been rumored to be romantically involved by the Korean press several times in the past but have consistently denied it.

The Chinese media reports did not present any hard evidence for its rumors.

Lee is scheduled to appear on China’s CCTV Lunar New Year special, and Park is about to begin filming a movie.