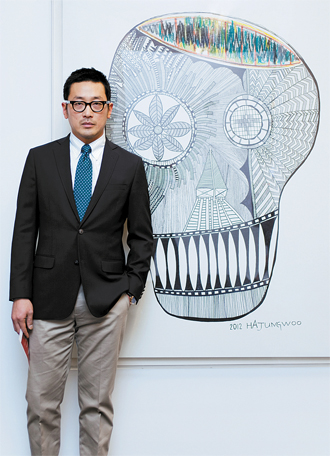 Actor Ha Jung-woo poses in front of his painting during the Prudential Eye Awards at Singapore Art Week. By Jeon Ho-seong

Actor Ha Jung-woo is the king of Chungmuro, the Korean equivalent of Hollywood.

He appeared in four films in 2013, with one yet to be released, and another in which he made his directorial debut. In 2012 and 2011, Ha appeared in two and four films, respectively.

The spy film “The Berlin File” (2013) attracted seven million viewers, while “Nameless Gangster” (2012) was one of that year’s most popular films, drawing 4.7 million viewers.

Ha has been so reliable for so long in the movie business that it’s said a film can’t go wrong if he’s in it.

He’s at the peak of his career, but he shows no signs of slowing down. In his new film, “Chronicle of a Blood Merchant,” which is set to begin shooting in May, the 36-year-old actor will adapt a novel version of the story into a screenplay, taking the lead role and direct.

When he’s in between films, he spends his time building up his artistic side.

Because he’s always portraying someone else’s life - from an insecure North Korean agent to a vicious gangster - Ha found that he needed time to look inside himself, so in 2007, he began to paint.

“I certainly painted a lot last year, maybe because I had a prolific year. The more I work, [the more] I find myself wanting to paint,” Ha said during a recent interview with the JoongAng Sunday, an affiliate of the Korea JoongAng Daily.

The interview took place in Singapore during Singapore Art Week, which ended Sunday. Ha was invited as a public relations ambassador for the inaugural Prudential Eye Awards, which are a part of the annual art week.

More than 700 Asian artists submitted paintings, sculptures, photographs and installation artworks, but only 20 of them were chosen to have their work displayed at the event, including Ha.

From left: “Berlin” (2013), “Hawaiian Host” (2013), “Brothers” (2013) A series of Ha Jung-woo’s paintings under the theme of “Berlin” and “Hawaii” will be shown during the solo exhibition “Trace” at Pyo Gallery, Itaewon-dong, central Seoul. The exhibition begins Feb. 6 and runs through March 5. Ha’s other 30 paintings will also be shown in southern Seoul from Feb. 7 to 28 at Maison Cartier, Cheongdam-dong. All proceeds from sales at Maison Cartier will be used to help children who need eye surgeries.

Q.How did you end up participating in the award as a public relations ambassador and not as an artist?

How do you feel about other artists’ works?

I was impressed by their creative way of thinking. Of the Korean artists [who participated in the event], I personally liked the installation by Sim Seung-wook, who won the award this year, and I loved the photography of Lim Chae-wook. Lim actually came over to my exhibition years ago. I’m also into the artwork of Charles Jang, Park Mi-jin and Kwon Hyun-jin these days.

I could see your painting from the exhibition hall. What is it about?

I painted it right after finishing “The Berlin File.” Around that time, I began a series of paintings using more patterns because I’m a huge fan of Jean Dubuffet. Most of his works are done with pens, so I tried to use pens as much as I could. After using pens more frequently, I felt like my paintings looked like those of Keith Haring.

You’ve never learned how to draw, but your drawing is decent.

It can’t be. I just spent much of my time doodling. Personally, I think drawing has nothing to do with painting. Of course, drawing is important in some ways because it is one technique to express yourself, but I believe drawing comes from your heart. That’s why it comforts me and makes me go forward as an actor.

To be honest with you, your vibrant colors and designs impressed me a lot, but it was hard to find artistic spirit from your paintings.

Everyone looks at my work from their own point of view. I’m not painting to tell people that I can paint, but I paint as if others write journals every night.

You’ve been painting for seven years. How do you evaluate yourself as a painter?

I feel embarrassed. It’s the same feeling when I flip through my old journals. But I think I’ve done a lot of exhibitions for a rookie. In fact, I didn’t want to share my paintings in the beginning, but I began to think the paintings are one way to represent myself to the public, whether I’m good at it or not. A lot of people also wanted to see them, too.

It seems as though your paintings are selling well. When you did an exhibition with other artists in New York last year, all 12 paintings sold out. During a recent exhibition that was held in Los Angeles earlier this month, four of the five paintings also sold out. But some say your works are overrated and receive too much attention because you were an actor before you became a painter.

I can relate to some criticism because I surely have a head start over others, but if I continue to paint, they won’t get me wrong.

I heard the prices of your works are equal to those of artists who are pretty well known in the art scene. Do you think the prices are based on your value as an actor, too?

I really don’t know. The gallery fixes the price.

We have stereotypes about artists. Artists should be sensitive and lonely, but you are different. You know how to lead people and love to mingle with them. But some of your paintings reflect your solitary side.

Actors can’t be honest with their feelings because we are always acting. But my paintings reflect my unconscious side. Sometimes, I feel lonely, then a dark painting comes out.

Last year was probably the best year for you. “The Berlin File” and “The Terror Live” became huge hits. Did it affect your paintings?

I certainly painted a lot last year, maybe because I had a prolific year. The more I work, [the more] I find myself wanting to paint more.

You debuted as a director last year with “Fasten Your Seatbelt.” If you paint in order to fulfill your artistic desire that is not filled by acting, why do you direct? Does it give you a somewhat different artistic achievement?

Painting is a work of my own, but filming is a work that you always have to team up with others. The only difference between acting and directing is that you have to make decisions when you are a director.

You’ve been painting mostly about people, but what would you like to add to your future canvases?

I want to delve deeper into people. I’m an actor and a director, and I always see people through the camera and monitor. People intrigue me all the time.

You are in between films. Where do you get inspiration for your paintings?

I’m not always driven by inspiration. Sometimes I paint things that I’m so into or some other times I start painting without knowing it.

Why did you choose “Chronicle of a Blood Merchant” as the first film in which you direct and act?

I thought the lead character of the story [a merchant who sells his blood for a living] is a character with many layers. Most of the time, he is a blunt father and husband, but he is, in fact, warm at heart.

Having two sides, I was enchanted by the character first and also liked the way the story was written, which is quite humorous.