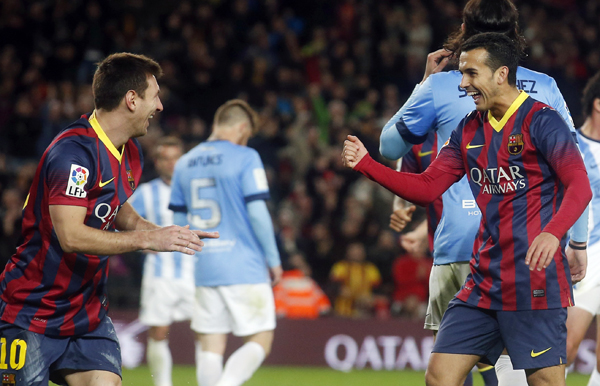 Barcelona and Atletico Madrid climbed back to the top of La Liga as Barca coasted to a 3-0 victory at home to Malaga and Atletico won, 4-2, at Rayo Vallecano on Sunday.

Real Madrid had claimed the overnight lead thanks to Saturday’s 2-0 home success against Granada before Barca and Atletico restored their one-point advantage with comfortable wins against outclassed opponents.

The joint leaders have 54 points from 21 matches, with Barca ahead on goal difference. Real are lurking ominously on 53 and Athletic Bilbao trail on 42 in fourth after they thrashed Osasuna, 5-1, on Sunday.

The Barca fans paid tribute to veteran midfielder Xavi before kickoff at the Nou Camp after he reached the milestone of 700 official games for the Spanish champions this month.

The Spanish playmaker turned in a typically impeccable performance controlling play in the center and Malaga was forced to rely on the counterattack to have any hope of troubling the hosts.

Barca’s Chilean forward, Alexis Sanchez, clipped the post in the fifth minute and Lionel Messi sent a dinked effort narrowly wide in the 22nd before Gerard Pique fired in the opener five minutes before halftime.

The Spain center back, who scored the equalizer in last weekend’s 1-1 draw at Levante, controlled the ball in the area from a Xavi corner and drilled it past Malaga goalkeeper Willy Caballero.

Pique headed against a post from another corner in the 54th minute and moments later Messi freed Pedro Rodriguez on the left of the area and the striker curled a shot into the corner.

Pedro turned provider just after the hour when he picked up another Messi pass and sent a low center to the far post, where Alexis tapped it home.

An easy win, their 25th in a row at home in La Liga, was just the tonic Barca needed after a difficult week when president Sandro Rosell stepped down amid a probe into alleged irregularities in the signing of Brazil forward Neymar last year.

Rosell’s deputy, Josep Bartomeu, has taken charge and was watching from the VIP tribune.

Pique said the club’s institutional problems were unlikely to have much effect on the players.

“Obviously a change in president is a subject of discussion among the general public but on the pitch we are professionals and we will try to win all the titles we can,” he said.

There was more positive news for Barca as its Netherlands midfielder, Ibrahim Afellay, came off the bench for the last five minutes of the game. Afellay was declared fit this week after battling a series of injuries over the past two years and will give coach Gerardo Martino an extra option as Barca seeks to defend its Liga title and chase Champions League and King’s Cup glory.