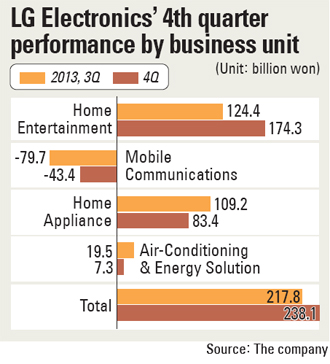 LG Electronics posted a deficit for its mobile phone business for the second consecutive quarter, despite improved sales.

But its mobile business posted a 43.4 billion won operating loss, compared to 79.7 billion won in the third quarter. The company stressed it was a positive sign.

“As we were releasing our strategic phone, the G2, in the third quarter, we were focused on marketing and operating loss increased,” said an official of LG Electronics. “But since then, sales have increased and the profit structure is strengthening.”

To raise the profile of its brand, the company boosted promotion of the marquee 5.2-inch G2 handset unveiled at New York’s Lincoln Center in August, as well as its first curved G Flex device introduced on Oct. 29. The 6-inch G Flex is now available in Asia and will be released in the U.S. market through AT&T, Sprint and T-Mobile USA in the first quarter.

LG is expecting the mobile phone business to turn around in the second half of this year.

“We are seeing some outcome of our massive marketing efforts for G2,” said LG Electronics President Jung Do-hyun during a media briefing yesterday. “By the time the next model, G3, comes out, I think we could take a turn into profit.”

The company booked a fourth-quarter loss of about 332.4 billion won from currencies, foreign debt and tax, it said without elaborating. Shares of LG fell 1.3 percent to 68,900 won at the close of Seoul trading, while the Kospi index fell 1.6 percent.

LG slipped two positions to fifth in the global smartphone market in the third quarter with 4.6 percent of shipments as it was overtaken by Lenovo and Huawei Technologies, according to data compiled by Bloomberg.

The company probably spent more than 200 billion won on marketing in the December quarter, said Greg Roh, of HMC Investment Securities in Seoul.