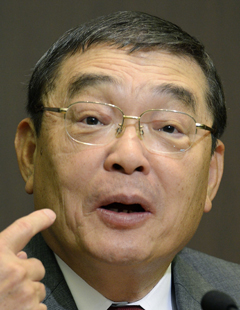 The new chairman of the Japanese national broadcaster NHK made insensitive remarks about women forced into sexual slavery by the Japanese military during World War II, prompting a backlash from Seoul.

In his first news conference as NHK chairman Saturday, Katsuto Momii claimed the so-called comfort women system was common in other countries during wartime.

“Do you really think [the comfort women problem] only happened in Korea?” Momii, who is a businessman with no prior background in broadcasting, said in response to a reporter’s question. “They were common in any war regions.” He cited Germany, France and the Netherlands as examples. “Why do you think there is still a red-light district in the Netherlands?” he asked.

While pointing out that a system of forcing women to be sex workers is wrong “under current morals,” Momii said that “comfort women accompanying the military was a reality of that time.”

His remarks were reminiscent of the controversy caused by Osaka Mayor Toru Hashimoto last year when he said that comfort women were “necessary” during wartime. Hashimoto expressed support of Momii’s remarks yesterday, calling them “justifiable” points.

Momii, formerly vice president of the trading house Mitsui & Co, added that he was not sure why Korea is bringing up the issues of compensation for the so-called comfort women “when all issues were resolved under the Japan-South Korea treaty. That is wrong.”

Korea has called for an official apology and compensation from Japan for its wartime atrocities against the comfort women, who were forced to serve at military brothels during World War II. The Japanese government claims the 1965 Korea-Japan treaty that normalized relations between the two countries exempts it from paying individual compensation for wrongdoings during its 1910-45 colonial rule of the Korean Peninsula.

Momii also touched on how the NHK should handle the touchy issue of territorial disputes with Japan’s neighbors and said, “It’s only natural to clearly state that the Senkaku Islands and the Takeshima Islands are Japanese territories,” echoing the position of the right-wing Prime Minister Shinzo Abe administration.

Korea says there is no dispute over its easternmost Dokdo islets in the East Sea, which Japan claims under the name Takeshima.

The Korean Ministry of Foreign Affairs released a Japanese-language version of a video about Dokdo on Saturday. That was a response to Japan recently releasing its video about the islets in multiple languages including Korean.

The ruling Saenuri and opposition Democratic Party yesterday slammed Momii in a joint statement. “Chairman Momii’s remarks show not only a lack of historical awareness, but also a fundamental lack of understanding of human rights. They are remarks at the brink of ignorance.”

“Japan has to be warned that it will forever be remembered as an unapologetic perpetrator if all of its victims pass away [without apologies],” Saenuri Party Chairman Hwang Woo-yea said yesterday at a Supreme Council meeting at the National Assembly.

“My heart cringes when I think that the last words that Hwang Geum-ja will remember are the NHK chairman’s remarks. If Japan has any integrity, it should be embarrassed that such a person is the head of a public broadcaster and ask him to step down.”

Momii’s remarks were picked up abroad. The BBC reported it was “a shock” that the chairman expressed political views at his first news conference.

The Asahi Shimbun reported that Momii’s comments prompted criticism from the Japanese government and quoted an unnamed member of Abe’s cabinet calling for Momii’s immediate resignation, saying that such “gaffes are unthinkable for the head of a media company.”

Chief Cabinet Secretary Yoshihide Suga said Momii had made the comments from an individual standpoint.

Momii belatedly said yesterday that his remarks Saturday were “quite inappropriate” and that he should have not made remarks based on personal opinion.

Around 16 percent of NHK’s international programming is funded by the government, according to the broadcaster. Momii was appointed to serve as NHK chairman for a three-year term by a board of governors appointed by Prime Minister Shinzo Abe, though he has reportedly denied he was Abe’s favored candidate for the position.

Amid the continued gaffes from Japan, Korea’s Ministry of Gender Equality and Family yesterday said that the government will increase its budget to support the comfort women this year to 4.587 billion won ($4.23 million), more than double last year’s 20 billion won.

There are more than 50 surviving women in Korea who were forced to serve as comfort women by the Japanese military. The ministry said the budget will go to their health care and living conditions. The government will use the increased budget for projects to spread awareness of the issue, such as movies, documentaries and history museums.

Gender Equality Minister Cho Yoon-sun said, “We will work with nongovernmental organizations, experts and international organizations to resolve the elderly victims’ sorrows and push for a Japanese apology while they are still alive.”