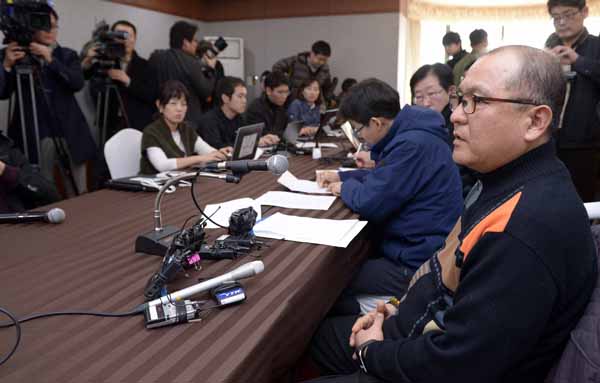 Kim Joong-soo, the spokesman of the Badminton Korea Association, speaks yesterday about the one-year sanction that badminton stars Lee Yong-dae and Kim Ki-jung received by the Badminton World Federation for their failure to take a doping test. [NEWSIS]

Korean fans will not be able to see badminton star Lee Yong-dae in the Asian Games in Incheon later this year because he has been suspended for one year by the Badminton World Federation for missing a doping test.

The Badminton Korea Association held a press briefing yesterday at the Olympic Parktel in Songpa District, southern Seoul, and confirmed that Lee, 26, and Kim Ki-jung, who both play for the Samsung Electro-Mechanics badminton team, have been suspended for one year by the BWF because they didn’t take the test on the days the federation had scheduled for them. The BWF also said yesterday on its website that the two have each received a one-year sanction for violating requirements relating to filing their whereabouts and the resulting missed tests under the BWF’s anti-doping regulations. The federation said their period of ineligibility is for one year, which starts tomorrow and ends on Jan. 23, 2015.

The federation said the two failed to take tests in March and November and also did not submit their whereabouts in September.

However, it appears the failures weren’t only the players’ faults.

“The two didn’t intentionally refuse to take the test when inspectors of the World Anti-Doping Agency visited the Taereung training camp, the place registered as the players’ whereabouts, in March and in November because they were participating in a competition,” Kim Joong-soo, the spokesman of the Badminton Korea Association, said yesterday.

“We were supposed to put their whereabouts information on the Internet in September, but we somehow failed to do that.”

He added said that the two athletes never took any illegal drugs and didn’t intentionally refuse to take the test. “It is a punishment for violating a process that they had to follow for the doping test. We are considering filing an appeal so the two can participate in the Incheon Asian Games because we think the level of the punishment is too strong.”

The BWF said that the two athletes appeared before a three-member doping hearing panel on Jan. 13 held in Denmark to answer the charges. The panel also recommended that the Badminton Korea Association be fined for its role in the case.

The federation said the maximum penalty for failing to provide whereabouts is a two-year sanction, but the panel reduced that to one year because the Badminton Korea Association said it was responsible for failing to register the players’ whereabouts.

The BWF said Lee and Kim have until Feb. 17 to appeal the suspensions to the Court of Arbitration for Sport in Switzerland.

“We apologize to the nation for our poor management of the players,” Kim Joong-soo said. “We will soon launch a special task force to solve the problem for the two so they can compete in the Asian Games.”