Was Ahn Jung-geun a terrorist?

Was Ahn Jung-geun a terrorist? 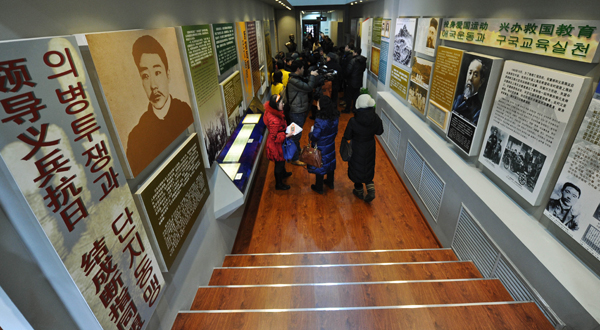 Will shots be fired on the confrontation line that separates three Northeast Asian nations? Japanese Prime Minister Shinzo Abe made a suspicious comment at the World Economic Forum in Davos, Switzerland. He said a certain physical clash or dispute may suddenly occur between Japan and China, comparing the relationship to that of Britain and Germany a century ago. Was it meant to be threatening? Were his comments provoked by the newly unveiled Ahn Jung-geun Memorial in Harbin, China?

Another person to watch is Japanese politician Yoshihide Suga, who called Ahn a terrorist. Ahn was sentenced to death for assassinating the first prime minister of Japan in 1909. The historical perspective of the Japanese leaders is focused 100 years in the past.

How dare he call Ahn, who received the death penalty, a terrorist? Who made the decision, and based on what logic? Ahn shot Ito at Harbin Railway Station, which at the time was Chinese territory under Russian jurisdiction. A commander of the Korean Army assassinated the leader of the Japanese Army.

Japan moved Ahn to Lushun Prison immediately and applied Japanese criminal law. The action was illegal under international law. The “act of anti-Japanese resistance by the lieutenant-general of the Korean Army” was fabricated and deemed a “reckless assassination by a skilled striker.”

Japanese authorities were afraid of international criticism if the national-level anti-Japanese organization was unveiled. Ahn claimed that international law should be applied in his case, as he was a member of the Korean resistance army who became a prisoner of the enemy. But his request was denied. Japan didn’t have the authority to carry out the execution. China’s Yuan Shikai, who had been the imperial resident of Seoul, later dedicated a poem when he learned that Ahn was executed. “The job you have been waiting for all your life is over. A life doesn’t last 100 years, but you will be remembered for 1,000 years,” he said.

So who is the terrorist here? In prison, Ahn listed 15 reasons why Ito should have been killed. Ahn killed Ito “because he disturbed the peace of Northeast Asia and estranged the relationship between Korea and Japan.” He condemned Japan for savagely breaking the peace instead of leading cooperation and providing an ethical model for the three Asian nations in the region.

Ahn’s solemn admonition came true 35 years later. Tens of thousands of Chinese were massacred, hundreds of thousands of Korans were enslaved and Southeast Asia became devastated. Under the banner of nationalism and Asian solidarity, people in neighboring countries were persecuted. Terror is disguising heinous crimes with a peace theory. To call Ahn a terrorist is a merciless act of terror on the world. The promise of the emperor to “maintain peace in Asia and keep Korea independent” was a lie, and Ito was the one who orchestrated the fraud.

Abe is a political descendent of the Choshu Domain. Shoin Yoshida, the spiritual leader, advocated a “revere the emperor, expel the barbarians” belief and became powerful during the Meiji Restoration. Ito and first Governor-General of Korea Masatake Terauchi were Yoshida’s students. So was Nobusuke Kishi - a Class-A war criminal and Abe’s maternal grandfather. Abe is a successor of Yoshida, who advocated punitive expedition to Korea and the invasion of Manchuria. It is historical destiny for Abe and his cabinet to be faced with Ahn’s Asian peace theory.

That’s why history education is so important. But Korean textbooks, with both progressive and conservative stances, have only brief explanations of Ahn.

Samhwa’s textbook says, “Ahn Jung-geun killed Hirobumi Ito, who had forced the Eulsa Treaty and served as the first resident-general of Korea.”

The Jihaksa and Kyohak textbooks simply state, “Ahn Jung-geun killed Hirobumi Ito in Harbin.” While a photo caption provides additional explanation, students are not given sufficient information to refute the Abe government’s claim that Ahn was a terrorist. We can understand the grand vision of Ahn for an Asian solidarity and world peace when we read the interviews with Judge Hiraishi before the execution and Ahn’s essay “On Peace in East Asia.” If Japan had paid the slightest attention to the visionary essay, Asia could have avoided the nightmare in the 20th century, including the Pacific War, the atomic bomb and division.

Ahn was a devout Catholic, and the heaven’s will and his belief in East Asian peace have connection. As he was being executed, he was reminded that all people are family and the children of God, regardless of race.

In October 2011, the Archdiocese of Seoul included Thomas Ahn Jung-geun among the candidates for beatification. If Pope Francis reaffirms the modern meaning of East Asian peace when he visits Korea in August, it would be a wake-up call for Japan’s imperialist genes. In a message to the participants of the World Economic Forum, Pope Frances asked to “ensure that humanity is served by wealth, not ruled by it.” His words exactly coincide with what Ahn was advocating for 100 years ago.