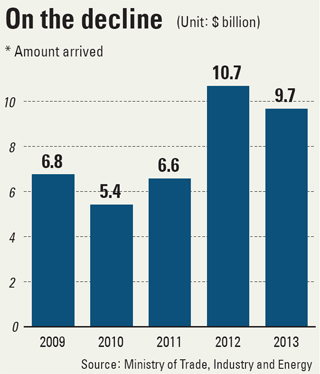 For the first time since 2010, foreign direct investment fell, mainly due to decreased investment from Japan.

Foreign direct investment fell 9.4 percent to $9.68 billion in 2013 compared to a year earlier, the Ministry of Trade, Industry and Energy said yesterday.

In terms of pledged investment, the total fell 10.7 percent to $14.55 billion compared to the same period.

U.S. investment in Korea dropped 4.1 percent from a year earlier to $3.5 billion. Investment from the European Union expanded 76.9 percent to $4.8 billion won.

The service industry attracted $9.9 billion, up 2.6 percent compared to 2012, through mergers and acquisitions of insurance companies, savings banks and entertainment content service providers.

The U.S. Federal Reserve is likely to decelerate its stimulus in the coming months, and the weakening trend of the Japanese yen seems to continue.

But the Trade Ministry predicted this year’s FDI will grow thanks to President Park Geun-hye’s foreign investment drive.