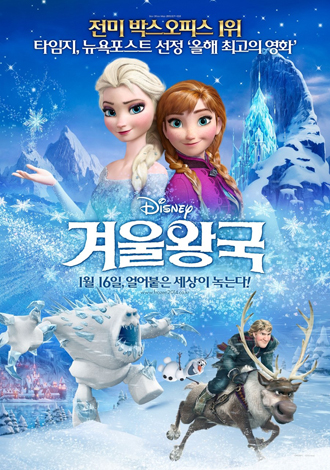 The soundtrack’s lead-off single, “Let It Go,” hit No. 1 yesterday on most of Korea’s online music outlets, including Melon and Bugs, while the album also landed high on the charts.

“Let It Go” is sung by Idina Menzel, who gained widespread fame through the television series “Glee.” In the original audio track of “Frozen,” she plays Elsa the snow queen.

“It is quite rare to see an animated movie soundtrack on top of the national chart,” said a spokesperson for Melon.

The soundtrack has also done well abroad, reaching No.1 on the Billboard 200 album chart for the weeks between Jan. 18 and Jan. 25.

“Frozen” has topped the Korean box office since being released on Jan. 16. As of Monday, it has made 25.8 billion won, or $23.9 million, in Korea. It has made $810 million internationally.