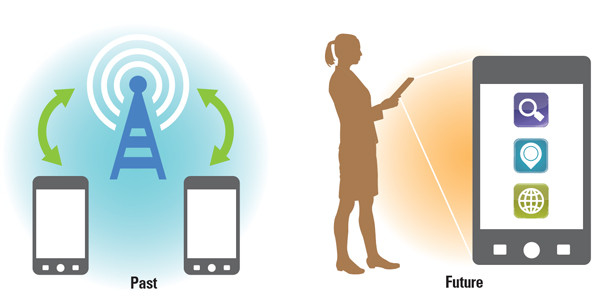 The Electronics and Telecommunications Research Institute (ETRI) became the first in the world to successfully develop a technology that allows mobile devices such as smartphones to communicate directly with each other instead of having to go through base transceiver stations.

According to ETRI yesterday, once the technology is commercially developed within the next two or three years, it will not only improve transmission speeds for phone calls, text messages and even data downloads but will also be used in other applications such as natural disaster emergency communications and child safety.

Current communication systems rely on base transceiver stations whether one is making a call or downloading a movie or music.

When there’s a huge population in a certain area such as Seoul’s Gangnam District, the users’ wireless communication services can slow significantly as a result of huge data traffic. Even with the fastest communication systems, clustered traffic has been a headache for telecommunication companies, which have been trying to expand their bandwidths to allow smoother and faster transmissions.

The D2D technology takes out the middleman, the base transceiver station, and detects and automatically connections two devices.

There is a similar technology currently used, but that technology has a tight limit on the distances in which it works.

Near-field communication, or NFC, only allows the connection of different devices within 10 centimeters (3.94 inches). The range expands to 10 meters (32.8 feet) with Bluetooth and to several meters via Wi-Fi-direct technology. But only those devices that are NFC-enabled can detect each other.

ETRI’s D2D allows connectivity over much broader distances. Even with obstacles like buildings, LTE service is smooth over 1 kilometer (0.62 miles) even when the devices are moving at relatively high speeds.

D2D also allows the devices to be connected with each other directly but also maintain their links to nearby base transceiver stations.

So if one party travels too great a distance and the D2D is disconnected, the device automatically connects itself via base transceiver stations without having to change settings.

Through this technology ETRI said parents could set up alarms that would inform them if their children leave a given area.

In times of disaster when the base transceiver stations are damaged or destroyed, the smartphone user can still communicate.

“The technology is meaningful because it enables data communication that consumes a lot less battery power and less data networks,” said an official from ETRI.

ETRI said the technology will be standardized by June by the Third Generation Partnership Project, a group of global mobile telecommunication standardization associations from five regions: the United States, Europe, China, Japan and Korea.