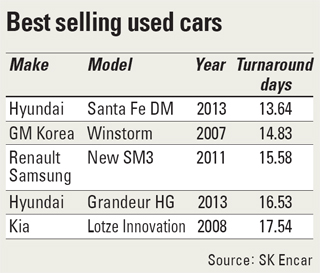 Hyundai Motor’s Santa Fe DM was the best-selling used car this month, according to data from SK Encar, the nation’s largest used-car dealer.

The company said yesterday it checked how long it took for each model to be resold through Jan. 27 and found that the Santa Fe DM was the fastest-selling model. On average, the time it took to sell a Santa Fe DM was 13.64 days.

SK Encar said that the midsize sport utility vehicle is wanted by many consumers because of its design and its driving performance. It meets customers’ needs for camping and other leisure activities, the company said.

“As the New Year comes, customers who want to drive a recently produced SUV are eyeing the 2013 Santa Fe DM,” the company said in a release. “The current price is around 27 million won [$25,000] to 33 million won.”

“Regardless of manufacturing year or miles clocked, all SUV models are popular these days,” the company said. “Those who are looking for an SUV as their second car even lower their budget purposely to get older SUVs.”

SK Encar said that the popularity of sedans increased this month. Only three sedans were in the top 10 last month, but there were six this month, although their sizes varied.

The affiliate of SK Group explained that sedans in the top 10 list have cheaper prices than other models in the same segment.