In telecoms, SK soars while KT is stumbling

In telecoms, SK soars while KT is stumbling

Telecom rivals SK and KT never stop competing as hard as they can, and last year SK came out as victor.

SK Telecom released an earnings report yesterday showing that 2013 was a good year, with both revenue and operating profit up compared to a year earlier.

KT, as forecast in the market, suffered a poor 2013, and its new chairman promised a turnaround after letting go of a slew of executives.

The company attributed its boost in operating profit to reduced marketing costs, including subsidies forked out to new subscribers, a major cost in the industry.

SK’s LTE subscriptions showed significant growth, while the number of people canceling their mobile services declined. The service cancellation rate, which was 2.6 percent in 2012, fell to 2.3 percent last year, while LTE users surged nearly 80 percent from a year earlier to 13 million.

Analysts said that fewer subscribers canceled their contracts due to aggressive marketing tactics by SK such as offering free voice calls among SK users who signed up for a special package.

KT also enjoyed a boost in its LTE subscriptions, which shot up nearly 102 percent from a year earlier to reach 7.9 million.

However, its declining fixed-line business, as well as a struggling mobile business, caused the second-largest mobile carrier to see its operating profit drop 28 percent from a year earlier to 874 billion won. Revenue was basically flat from the year before, dipping 0.2 percent to 23.8 trillion won.

KT’s earnings report was released the day after its new chairman, Hwang Chang-gyu, unveiled his plans for aggressive changes including refocusing the company’s businesses on telecommunication services, as well as major personnel shifts. 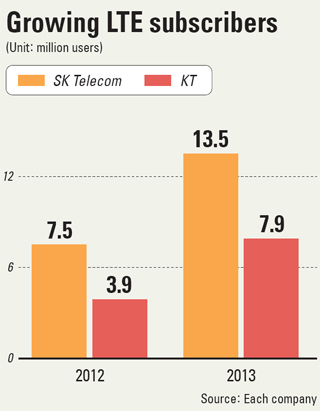 Hwang is focusing on telecommunication services as LG U+ has been eating up KT’s market share recently, and SK’s lead has only widened. Under previous Chairman Lee Suk-chae, who was forced out in November, KT aggressively expanded into other businesses, including automobile rentals and media content development.

But some analysts said that searching for new revenue sources may have affected the company’s competitiveness in its main area, which is mobile service.

Hwang also stressed the need to downsize an excessive number of executives, which he said was holding back swift decisions and bold new thinking. Later in the afternoon, Hwang announced personnel shifts that resulted in the downsizing of 27 percent of the high-ranking executives at the company.

The KT chairman promised to return 30 percent of his base salary to the company. In a press release, Hwang said he will not accept bonuses until KT shows genuine signs of recovering.

The company calculated those moves would have been the equivalent of a 60 percent cut to the KT’s chief compensation in 2012. Other executives also promised to return 10 percent of their salaries, which the company said would save roughly 20 billion won in costs.