Influx of tourists from China will buoy Korea

Influx of tourists from China will buoy Korea 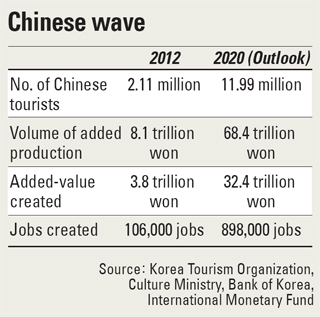 More than 10 million Chinese tourists are expected to visit Korea in 2020, and the impact on the domestic economy will be huge. The Chinese wave will spur all parts of the economy and will also create jobs, according to a local think tank.

According to the Ministry of Culture, Sports and Tourism, 4.3 million Chinese visited Korea last year, including 3.14 million tourists and 100,000 students, outpacing the number of Japanese visitors for the first time.

The number is expected to reach over 10 million, according to Hyundai Research Institute, if you apply the 20 percent yearly growth seen in the number of Chinese tourists globally in the past three years.

“The market share China holds in terms of overseas travel spending is 9.5 percent, the largest in the world as of 2012,” said an official from Hyundai Research Institute.

The institute noted that what differentiates Chinese tourists in Korea from other nationalities is that they spend most of their time and money on shopping. According to the report, the average amount spent by each Chinese visitors in 2012 was $2,150, the largest among tourists from any country.

“While [other] foreign tourists spend 43 percent of their total traveling expense on shopping, Chinese tourists spend 61 percent,” the official said.