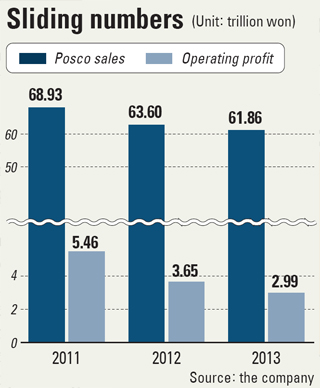 Posco’s earnings continue to fall as the nation’s largest steelmaker hopes for a turnaround under its new skipper, Kwon Oh-joon.

Posco said a bad year for industry and the repair and maintenance of some of their furnaces caused the drop in production and sales.

The steelmaking unit alone had annual sales of 30.54 trillion won, down 14.4 percent from a year ago, and operating profit of 2.21 trillion, a 20.3 percent year-on-year decline.

“There were oversupply problems in the market, and the price of steel products fell an average of 100,000 won per ton compared to a year ago,” the company said in a release.

Analysts said Posco’s poor earnings were not a surprise considering the strong won to weak yen situation and the massive production coming out of China, which were destined to dent the steelmaker’s performance.

However, Posco said there was some good news, such as the increased sales of tire cords and steel used in automobiles and ships.

Posco Engineering and Construction got 94 percent of its total orders from overseas last year, the company said.

However, Posco is a shadow of its heyday when it had more than 7 trillion won in operating profits in 2008 and a profitability ratio of over 17 percent. Its operating profit ratio for 2013 was only 4.8 percent.

Posco said it is focusing on “management based on profitability” under Kwon, who will officially become the conglomerate’s chairman and CEO in March, succeeding Chung Joon-yang.

“Although a slump in the industry is one main reason, Posco’s profitability declined also because of its aggressive M&As under Chung Joon-yang,” said Kang Tae-hyun, an analyst at E-Trade Securities.

“For this year, the steel industry is expected to be a little bit better than last year, but a full recovery will still be difficult.”

Posco saw its credit ratings plunge in the fourth quarter of last year because of concerns about its finances. Standard & Poor’s lowered Posco’s ratings from “A-“ to “BBB+” while Moody’s demoted Posco’s bond grade from “Baa1” to “Baa2” and Fitch lowering it from “BBB+” to “BBB.”

Posco said that it is trying to improve its financial structure. The company said yesterday its debt ratio in 2013 fell 2.5 percentage points to 84.3 percent. Its target is to lower the ratio to 76 percent this year.

The group added that it has speeded up the trimming of its affiliates. The company now has 46 affiliates, down from 70 in 2011, according to Posco.

For this year, Posco is aiming for 65.3 trillion won in sales, 5.6 percent up from last year. It also plans to produce 37.7 million tons of crude steel and sell 34.9 million tons.

However, investments in R&D have been cut to 6.5 trillion won, 2.3 trillion won lower than last year.

To achieve its goals, Posco said it will first increase sales of high-value products related to the automobile and energy industry to account for 43 percent of its total sales. It also plans to save 603 billion won by reducing electricity costs and enhance manufacturing processes.

The company plans to expand its electricity generation capacity from 3,445 megawatts to 3,910 megawatts this year and enter the power generation business with coal to boost profits.

For the infrastructure business, the group aims to land more overseas projects, making them account for 62 percent of its total orders in this year.

The conglomerate is also looking to take advantage of its global network.

Posco yesterday said it has completed the construction of its second plant in Mexico for producing galvanized steel sheets used in automobiles.