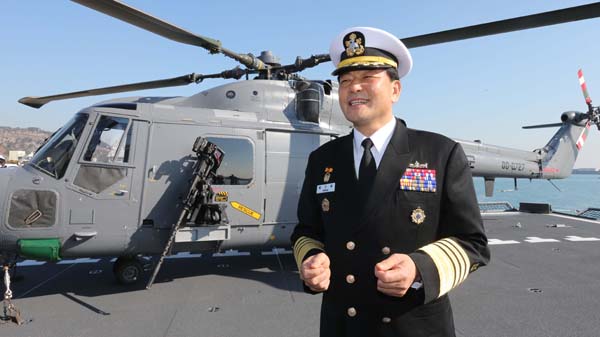 The Cheonghae naval unit is best known for Operation Dawn of Gulf of Aden, a mission that occurred three years ago when the Korean Navy rescued a Korean tanker that had been hijacked for six days by Somalian pirates.

On Jan. 15, 2011, the Norwegian-owned, Korean-operated Samho Jewelry was taken over by Somalian pirates. A day later, the 4,500-ton Choe Yeong, a Navy destroyer and part of the Cheonghae Naval Unit in the Gulf of Aden, was dispatched to the area and rescued all 21 crew members on Jan. 21. Eight pirates were killed and five were captured.

On Jan. 16, just ahead of the third anniversary of the mission, the JoongAng Ilbo interviewed Navy Chief of Staff Admiral Hwang Ki-chul, who led the mission in the Gulf of Aden from Busan.

That day, Hwang was seeing off the Navy’s 15th rotation of troops to the Gulf of Aden as part of global efforts to combat piracy off the coast of Somalia, sending them from a Busan port aboard the KDX-II class 4,400-ton destroyer, Gang Gam-chan. He shook hands with all 300 crew members of the ship before they left.

On the deck of the ship is a placard that states, “The Cheonghae Unit will protect its people and vessels.”

Since March 2009, the Busan-based Cheonghae Unit has been deployed in the Gulf of Aden and has rescued 31 vessels, both Korean and foreign, from pirates.

As pirates became rampant in the Somalian seas in 2008, various nations deployed their navies and some ships even hired armed guards from private companies. Those for-hire services charge $100,000 for each escort.

The Cheonghae Unit has escorted some 5,280 Korean ships, which works out to saving $528 million - although for Hwang, the money is not the major issue. “The fact that our people can concentrate on their economic activities on the seas, thousands of leagues away, is a profit that cannot be simply measured by money,” he said.

Q. You became Navy Chief of Staff in October, so this send-off ceremony for the Cheonghae Unit seems especially meaningful.

A. It’s already been three years. Returning to the place where I spent a sleepless week strategizing [for the Gulf of Aden operation] and overseeing the sending off ceremony reminds me of the event like it was yesterday. I feel pride knowing that we stand alongside 14 countries, including United States, China and France, in sending our Navy to the Gulf of Aden to protect vessels in their sea travels. I hope the destroyer Gang Gam-chan finishes its mission well.

The Gulf of Aden operation was the first operation when we rescued Korean citizens abroad.

It was an opportunity to see how a victorious Army receives the support of the people. Next year, the Navy celebrates its 70 year anniversary, and the Navy’s first rescue mission in its history was a success. As we have gone from a nation that receives aid from countries all over the world to being able to one that protects ourselves on our own and protects other nations’ vessels, we have been able to prove that our nation’s status has become that much more elevated and that our Navy’s overseas operational efforts have improved drastically. But more than anything, it was an opportunity to lift the morale of the Navy following the 2010 Cheonan shelling.

How did you prepare for the operation?

Full command was handed over from Kim Kwan-jin, the minister of national defense and former chairman of the Joint Chiefs of Staff of Korea. The preparation stage, strategic planning and conducting of the operation was all left to me. We just reported on preparations. This actually increased the pressure, which is why we prepared that much more thoroughly. We took statistics and rescue examples from others countries, but because we didn’t have experience, it was not an easy task. Pirates have a lot of training and experience. If we wanted it bad enough, I thought an answer might be found in my dreams.

So I got everyone from lieutenants without any operational experience at sea to veteran admirals to attend strategy meetings and get their opinions. That’s because we had to plan for every imaginable scenario. We maximized our strengths and analyzed the pirates’ weaknesses. The direction and speed of the boats that our commandos would ride in transit, the time and place that they would board the vessel, what would happen on the Samho Jewelry, all were practiced to the second. It was a battle against time. The helmets that our commandos wore had cameras attached so that we could view what was happening in real time.

(Through this set up, Hwang and officials back in Busan, aboard a ship similar in size with the Samho Jewelry, could plan precise scenarios.)

Nobody was killed during the operation.

Our biggest goal was to have no victims, and we reflected this in our operation scenario. Because the pirates did not understand Korean, we communicated [to the crew] to lie on their stomachs when there was an attack - bullets could be fired in any direction and the crew could have been hurt. That’s why we told the Lynx helicopters and the Choe Yeong to shoot the machine guns toward the ship’s funnel.

The government and the Ministry of Foreign Affairs also played a big role, giving us information that a pirate ship mounted with missiles was approaching. We were also able to locate the pirates through the U.S. P-3C patrol planes. But the biggest factor was our highly trained officers, who rapidly and effectively took control of the situation.

Was there an episode that was not made public at that time?

The day before the operation, on Jan. 20, 2011, the unit cook prepared chueotang [loach soup] for lunch for us to gather strength. But I thought that if I ate that, the special unit might slip as they boarded the vessel. I asked what was on the soldiers’ menu and saw that it was chicken soup, so I asked for that to be brought out. I chose chicken because when they grasp something with their claw, they will not let go. I thought then that the operation would be a success.

Recently, with heightened tensions with North Korea, there is criticism that the Cheonghae Unit should be disbanded.

Our Army is preparing in case of North Korean provocation. If there is an armed clash, our biggest task is that we definitely have to win. Our soldiers are doing well and will continue doing well. However, our country’s imports and exports are important. Our country makes 25 percent of the vessels constructed in the world, and our vessels transfer 10 percent of the cargo in the world. Protecting them is also our Navy’s task. South Korea’s economy soldiers are not just protecting our vessels that are active in waters across the world.

Until now, we have successfully rescued 31 vessels from pirates in 21 separate incidents. Piracy in the Gulf of Aden has decreased but there has been an increase in well-trained pirates active in the Strait of Malacca and the Indian Ocean. The Cheonghae Unit’s role can be considered even more important now.