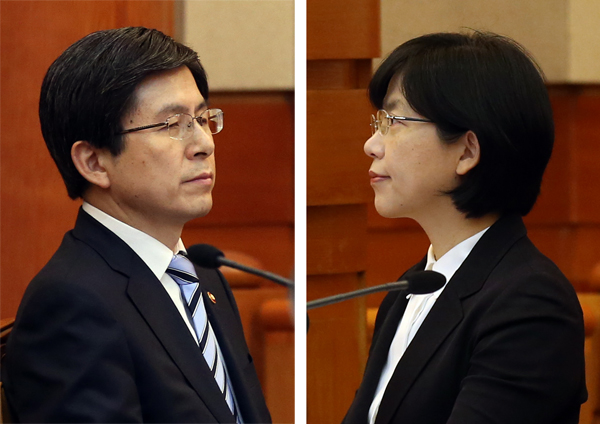 The Constitutional Court held its first public hearing yesterday on the government’s petition to dissolve the controversy-ridden Unified Progressive Party.

The Park Geun-hye administration petitioned the Constitutional Court to dissolve the UPP last November, an unprecedented move in Korea’s history. Those actions came in the wake of the arrests of Representative Lee Seok-ki and three other UPP members on suspicion that they tried to overthrow the government in the event of a war with North Korea. The unprecedented legal case has drawn widespread media attention.

Justice Minister Hwang Kyo-an and Lee Jung-hee, chairwoman of the beleaguered UPP, presented their arguments before a bench of nine constitutional judges.

In a five-minute address, Justice Minister Hwang presented the government’s argument that the core group inside the party conspired to subvert the government.

“In accordance with North Korea’s policy directives, the UPP’s core group, [the Revolutionary Organization], conspired to overthrow the Republic of Korea,” the minister stated.

Hwang also argued that the UPP aimed to subvert the Park administration and build a socialist society modeled on Pyongyang’s social system.

Prosecutor Jeong Jeom-sig, a member of the legal team that represents the government in the petition, underscored that UPP Representative Lee conspired to destroy key national infrastructure during a meeting with members of the alleged anti-state Revolutionary Organization (RO) in May, and claimed that the UPP still tries to protect Lee.

The team representing the UPP - which includes its chairwoman and lawyers from the progressive Lawyers for a Democratic Society - countered the government’s argument at the court by claiming the existence and the activities of the UPP are within the boundaries of the underlying principles of democracy.

The team added that the petition for the dissolution of the party was a sign of retreat from democracy in Korea.

“The first sign of dictatorship is to suppress and prohibit the activities of political opponents,” claimed Lee in her 20-minute argument. “The petition to disband the UPP infringes upon basic rights of political participation of the people.”

Political observers anticipate that the court’s ruling on the four defendants, charged with rebellion, which is expected to be announced sometime next month, will play a critical part in the Constitutional Court’s decision regarding the petition.

A defense team for Representative Lee claimed in the ongoing trials that the RO was a merely private group, made up of members and supporters of the UPP who have no affiliation to North Korea.

The next public hearing in this case is scheduled for Feb. 18.