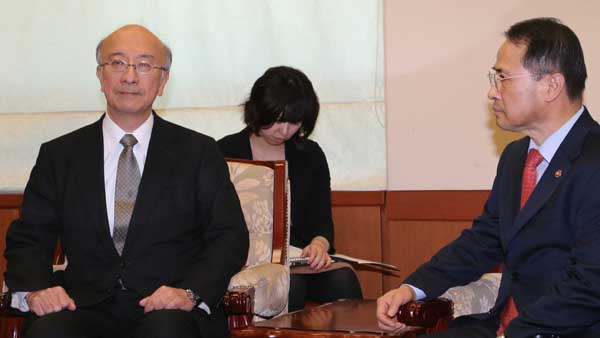 The Korean government yesterday issued a strong complaint and demanded that Tokyo withdraw revisions for teaching guidelines that would stipulate in its textbooks that the Dokdo islets in the East Sea are part of Japanese territory.

Hakubun Shimomura, Japan’s minister of education, culture, sports, science and technology, announced earlier in the day the country’s plans to revise its teaching guidelines to state that both the Dokdo islets and the Senkaku Islands, called Diaoyu by China, are rightfully claimed by Japan.

The revised manual, which determines teaching content that will be reflected in Japanese middle and high school textbooks, states that Korea is “illegally occupying” Dokdo, which Japan calls Takeshima.

Shimomura declared that it is “natural” for Japan to teach its students about its indigenous territory, echoing remarks he made earlier this month when the revisions were under discussion.

In response, the Korean Ministry of Foreign Affairs summoned Ambassador Koro Bessho, the top Japanese envoy to Seoul, to lodge a strong complaint regarding the measures, amid frosty relations over ongoing territorial and historical disputes.

First Vice Foreign Minister Kim Kyou-hyun, in stern words to Bessho, questioned whether “Japan is heading toward its nationalist path, which caused evils” to its victim nations.

Foreign Ministry Spokesman Cho Tai-young said yesterday at a briefing that the Korean government “strongly denounces” the revision of its teaching guidelines by the far-right administration of Prime Minister Shinzo Abe.

He said that the Abe administration had again laid “groundless claims over Dokdo that historically, geographically and by international law clearly belong to Korea, and is trying to teach these wrongful claims to the next generation.”

Cho added that such acts “clearly [show] that Japan still has not been able to discard its bad habits of historical distortion and nostalgia for its imperialistic past.”

At a press conference, Education Minister Seo Nam-soo added: “The content from Japan’s culture and education ministry that will plant an incorrect understanding of territorial and historical issues to its young students is a rather uneducational act, which

puts the good, neighborly relations of nearby countries - and peace in Northeast Asia - at risk.”

Such teaching manuals, though they are not legally binding, serve as guidelines for Japanese middle and high schools and are also used as a reference for textbook publishers. The revised manuals are expected to be used in the screening of textbooks in April. The Japanese government last revised its teaching manuals in 2008, which did not directly touch upon the Dokdo islets.

While the guidelines are usually revised every decade, this round of revisions has come about earlier, possibly as part of the Abe administration’s push to take a stronger position on its territorial issues.

The situation is not expected to ease any time soon, especially with Japan’s Takeshima Day scheduled for next month on Feb. 22 - an event celebrated in Shimane Prefecture since 2005. Korea is expected to take stronger measures to spread global awareness on the Dokdo issue, following up its YouTube video clip and website.

The Northeast Asian History Foundation, a state-run think tank, yesterday launched an emergency meeting of scholars in response to Japan’s plans to revise its teaching guidelines to analyze the issue and discuss policy measures for government response.

“While the teaching manuals are not legally binding, they are effectively binding because they are government-authorized guidelines for teaching,” said Nam Sang-gu, a senior researcher at the Dokdo Research Institute of the Northeast Asian History Foundation.

“It is problematic that, through their schooling, the youths who hold responsibility of Japan’s future will gain an incorrect understanding of Dokdo. So we have to conduct our education so that our youths can logically convince Japanese youths in regard to this issue.”