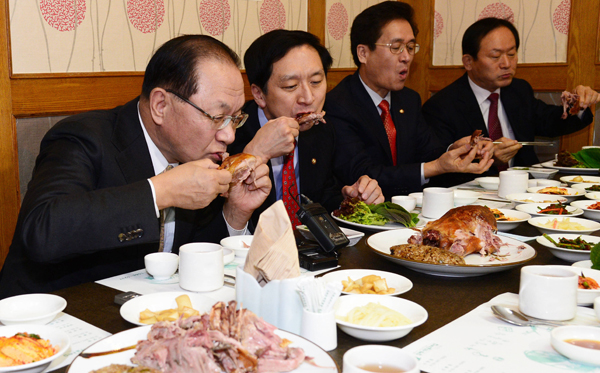 Hwang Woo-yea, left, chairman of the ruling Saenuri Party, along with other party leaders, eats duck yesterday at a restaurant in Yeouido, Seoul, to promote its consumption. Duck meat consumption has plummeted recently amid outbreaks of avian influenza (AI) at duck farms. The food safety authority maintains that duck and chicken meat are safe to eat as long as they are properly cooked and heated through. [NEWS1]

A day after the government imposed a 12-hour ban on the movement of poultry farmers and their vehicles in an all-out effort to contain the spread of avian influenza (AI) - particularly to Seoul and its surrounding areas - farmers from a chicken farm in Pyeongtaek reported what they suspected was an outbreak, sparking fears of a worst-case scenario for quarantine authorities.

A poultry farmer in Pyeongtaek notified authorities of a possible infection after hundreds of chickens on the farm died over the last few days. It was the first report that has come from Gyeonggi since Jan.16, when the virus was first confirmed in Gochang County, North Jeolla.

Following a preliminary autopsy of the dead chickens, quarantine authorities said the animals were likely to have been hit with the virus that causes bronchitis, not the AI virus.

“Though it is still early to confirm, it appears that AI was not the cause of the deaths,” Lee Joon-won, deputy minister of the Ministry of Agriculture, Food and Rural Affairs, said yesterday during a press briefing at the Sejong Government Complex.

The authorities are currently working on verifying the cause of death, which could take up to several days.

The report from Pyeongtaek has put officials on high alert because of the grave consequences it could have should the chickens be confirmed to have been infected with H5N8, a highly pathological strain of the AI virus.

More than 15 million chickens are raised at 422 farms in Pyeongtaek, Anseong and Hwaseong, in southern Gyeonggi. The city is about 84 kilometers (52 miles) from Seoul.

Quarantine officials in Changnyeong County, South Gyeongsang, were furiously working to combat the disease after the feces of migratory birds in the county’s Upo wetland were confirmed to contain the AI virus yesterday. The wetland, near the Nakdong River, is home to the endangered sacred ibis.

In full-fledged efforts to contain the spread of the virus ahead of the Lunar New Year, the government has mobilized thousands of government workers and military service members to conduct sterilization and inspection efforts nationwide. The authorities have also advised people to avoid visiting provincial farms, lakes or other habitats where large flocks of migratory birds gather.

“I ask the public to refrain from visiting poultry farms or migratory bird habitats during the holidays, and to cooperate with the authorities to sterilize their vehicles on the roads,” Lee Dong-phil, the agriculture, food and rural affairs minister, said yesterday during the briefing.

As of yesterday, the Rural Affairs Ministry said 1.5 million chickens and ducks have been slaughtered across 60 farms. In addition, about 530,000 animals from 10 farms are expected to be culled in the coming days.

Under the government’s directives on disease control, a poultry farm is subject to culling if it is located within a 3-kilometer radius of an infected farm. The government compensates farmers the market price for slaughtered animals if it can be verified that they were not infected. Compensation is 80 percent for infected birds.

In the current outbreak, the government has confirmed that 25 farms are infected with the H5N8 strain of AI - 23 of which are in North Jeolla. The remaining two farms are in Buyeo County, South Chungcheong and Haenam County, South Jeolla.

According to the government, the H5N8 strain does not pose an immediate threat to people, nor does it have a history of infecting humans.