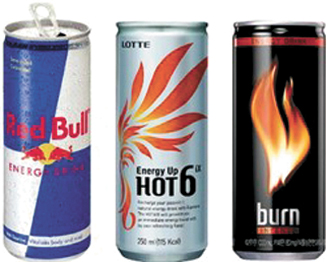 Stores in elementary, middle and high schools, as well as stores designated for children, will be banned from selling highly caffeinated drinks as of Friday, the Ministry of Food and Drug Safety announced yesterday.

According to the new mandate, drinks that have more than 0.15 milligrams per milliliter are categorized as highly caffeinated drinks.

“The ordinance was revised over assertions that children are consuming too much caffeine,” said Oh Gyung-tak, the head of the ministry’s Dietary Life Safety Division.

When the revised ordinance is enforced this Friday, television operators will also be prohibited from broadcasting advertisements for caffeinated beverages from 5 p.m. to 7 p.m. - considered prime time for children. So far, such regulations have only applied to high-calorie, nutritionally deficient products among foods targeted for children.

“Drinks with high doses of caffeine must mark the amount of caffeine on the product in a noticeable manner,” said an official from the ministry.

The dose of caffeine, which used to be marked in small characters, will be labeled in red so it is prominent, the official added.

The official also said that the ministry will increase educational and promotional efforts targeted toward children to prevent excessive caffeine consumption among those age groups. The authority said it will guide school cafeterias and designated stores in accordance with the amended policy.

Stores that sell highly caffeinated drinks will be charged 100,000 won ($92), according to the ordinance, while television broadcasters will face a 10 million won fine.

The ministry recommends that children should consume less than 2.5 milligrams of caffeine per every kilogram of their weight, which means that a 40-kilogram child should ideally have less than 100 milligrams.

On average, one energy drink contains 62 milligrams of caffeine, which means two cans would be more than enough for most children.

“Excessive intake of caffeine can cause headaches or insomnia and hinder the absorption of calcium,” said Joung Yoo-sook, a professor of neuropsychiatry at Samsung Medical Center.